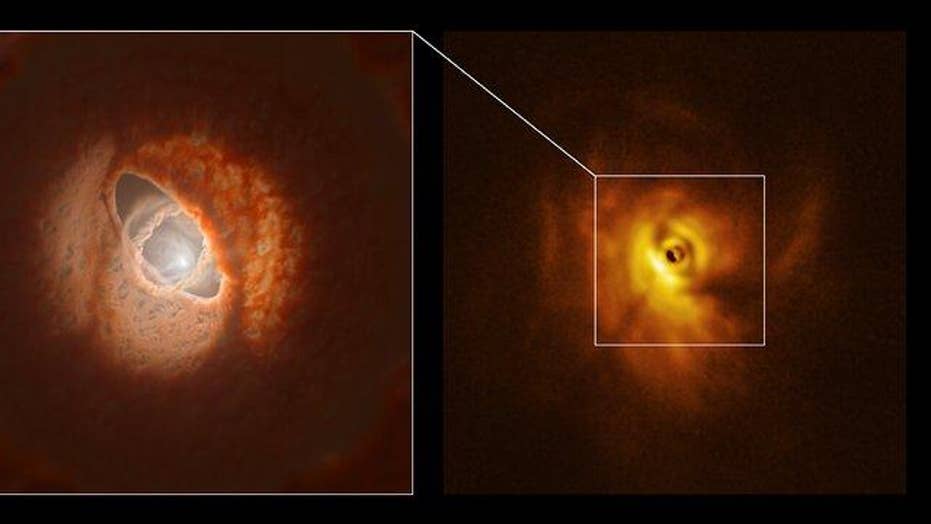 Scientists have discovered a stellar system where the formation of planets might take place in dust and gas rings within a “warped circumstellar disc around multiple stars.”

The presence of multiple stars has sparked comparisons with the fictional “Star Wars” planet “Tatooine,” which is famously depicted in the movie as having two suns.

Experts from the U.K.’s University of Exeter led the international team that made the discovery.

“A view from a potential planet around this system will give the observer a stunning view of a tilted, multiple stellar constellation--similar to Star Wars' Tatooine,” scientists explained in a statement.

The system, GW Orionis, is located 1,200 light-years away in the constellation of Orion and comprises three stars and the “deformed, broken-apart disc” that surrounds them, according to the researchers. A light-year, which measures distance in space, equals about 6 trillion miles.

A paper on the research is published in the journal Science.

The European Southern Observatory's Very Large Telescope (VLT) and the Atacama Large Millimeter/submillimeter Array (ALMA), which are both in Chile, were used to make the discovery, along with Georgia State University's Center for High-Angular Resolution Astronomy telescope array (CHARA) at Mount Wilson Observatory in the Angeles National Forest in California.

"We're really excited that our new MIRC-X imager has provided the sharpest view yet of this intriguing system and revealed the gravitational dance of the three stars in the system,” said Stefan Kraus, professor of astrophysics at the University of Exeter, who led the research, in the statement. “Normally, planets form around a flat disc of swirling dust and gas- yet our images reveal an extreme case where the disc is not flat at all."

The historic Mount Wilson observatory has been in the news recently as a result of the Bobcat fire, one of the largest wildfires in the history of Los Angeles County, which has come close to Mount Wilson.