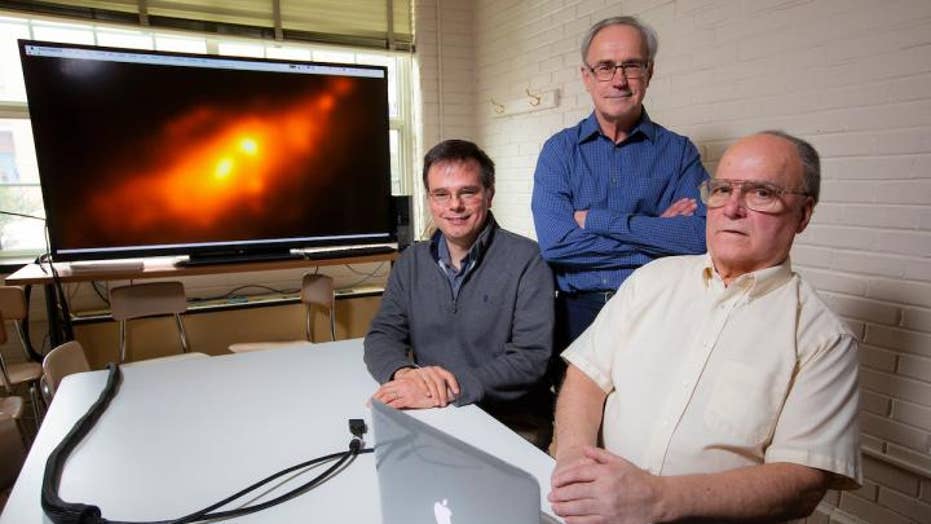 Allen Lawrence, a retired electrical engineer, enrolled in astronomy courses at the University of Wisconsin-Madison in 2011. In 2013 he began studying a system where two galaxies interact; a larger galaxy called NGC 4490 (dubbed “the Cocoon Galaxy” on account of its shape) and NGC 4485, a smaller galaxy.

Located about 30 million light-years from Earth, the system is about 20 percent the size of the Milky Way. A light-year, which measures distance in space, equals about 6 trillion miles.

Lawrence, who earned a master’s degree in astronomy from Iowa State University in 2018, used infrared images from NASA’s Wide-field Infrared Survey Explorer to reveal a double nucleus galaxy in NGC 4490.

"I saw the double nucleus about seven years ago," Lawrence said in a statement released by Iowa State. "It had never been observed — or nobody had ever done anything with it before."

A paper on the discovery has been accepted for publication in the Astrophysical Journal. Lawrence is the paper’s first author. Co-authors are Iowa State professors Charles Kerton and Curtis Struck, as well as East Tennessee State University professor Beverly Smith.

The paper describes the nuclei as similar in size, mass and luminosity. The double nucleus structure, scientists say, could explain why the galaxy system is surrounded by a plume of hydrogen.

"The most straightforward interpretation of the observations is that NGC 4490 is itself a late-stage merger remnant" of a much-earlier collision of two galaxies, the authors write in the paper.

NASA recently announced that a 17-year-old summer intern made an incredible planet discovery. Wolf Cukier, a student from Scarsdale High School in New York, had just finished his junior year when he started his internship at NASA’s Goddard’s Space Flight Center in Goddard, Md., last summer. Within just a few days, he made an incredible find while sifting through variations in star brightness captured by the space agency’s Transiting Exoplanet Survey Satellite (TESS) uploaded to the Planet Hunters TESS citizen science project.

A signal from a distant system called TOI 1338 turned out to be a planet. The planet, TOI 1338 b, is the first circumbinary planet, or world orbiting two stars, that has been spotted using TESS data. TOI 1338 b is about 6.9 times larger than Earth, which means that it is between the size of Saturn and Neptune.