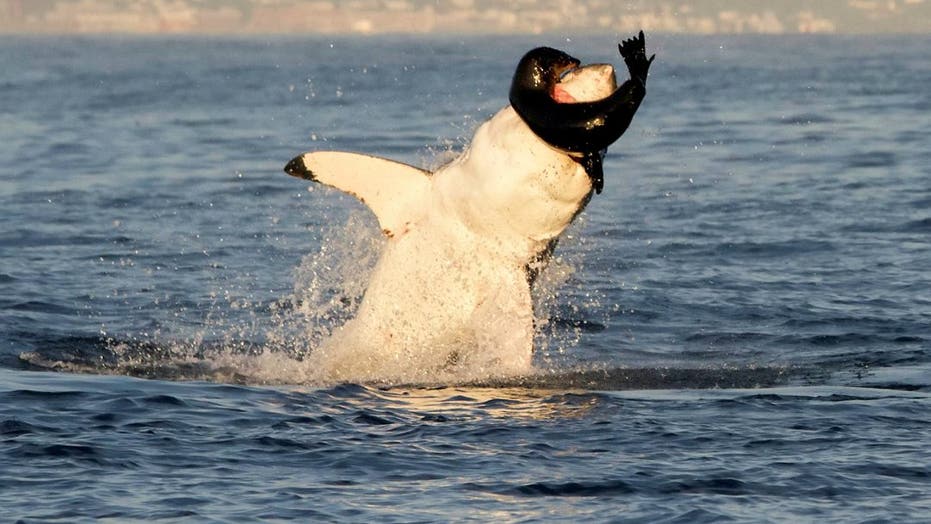 A photographer captured an image of a great white shark breaking the water to catch its prey, a seal pup, British news agency SWNS reports.

William Bucheit, of Spartanburg, S.C., captured the remarkable photo while hunting on an eight-day adventure in False Bay, South Africa. He was on a trip put together by Apex Shark Expeditions when the 12-foot great white breached the ocean to devour its prey.

“For sheer adventure and natural wildlife activity, False Bay was easily the best location on the trip," Bucheit, 44 said. “There’s just something special about being wide-awake at 5:30 am, preparing to watch great whites hunt seals in the golden light of dawn."

This is the heart-pounding moment a wildlife photographer filmed a voracious great white shark breaching the water to devour a helpless seal pup. (Credit: SWNS)

In the first two days of the trip, Bucheit said he saw about 15 predations, but none so close as this one.

“About 200 feet from the boat, a juvenile seal leaped several feet into the air," Bucheit explained. "For several seconds, the shark remained unseen, then the 12-foot white torpedo lunged for its prey. He missed the seal on his first attempt, chomping at the salty sea air as if posing for an action picture."

Bucheit continued: “The pup surfaced a few feet away as all of the predator’s massive weight splashed back into the sea. A moment later, the white beast launched from the depths, this time with breathtaking focus and precision. It rocketed so far out that only its tail was left in the water, the doomed seal pup thrashing around inside its vice-like jaws."

Seal Island in False Bay is home to roughly 65,000 seals, making it the perfect area for sharks to feed.

The sighting marks a return to the great white shark tourism industry in South Africa, which was decimated in 2019 after great whites seemingly disappeared from Cape Town, a development that left experts baffled.

"Further supporting evidence of the absence of these large apex predators is the lack of any feeding or bite marks on whale carcasses the city has removed from False Bay this year," Cape Town's municipality said in an August 2019 statement.

"We do not know how their absence from False Bay would affect the ecosystem," the municipality added. "Neither do we know the causes for their disappearance."

Despite the attention they receive and the fact they've lived on Earth for more than 400 million years, researchers are still learning about great white sharks.

A study published in February 2020 found that a variant has lived in the Mediterranean Sea for 3.2 million years, far longer than previously believed.

In July 2019, great white sharks were seen interacting with each other for the first time ever off the coast of Chatham, Mass.