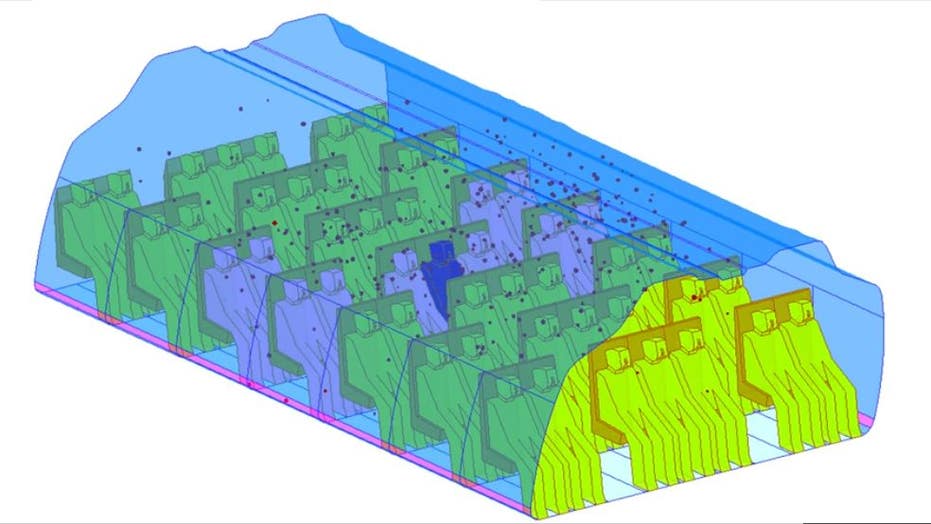 The coronavirus pandemic has brought air travel to an unprecedented standstill -- wreaking all sorts of havoc and putting countless jobs at risk -- but a new visualization is unlikely to make people eager to fly the friendly skies again soon.

The motion graphic produced by Purdue University researchers shows the aftermath of a single cough on an airplane, with tiny invisible droplets dispersing throughout the cabin, possibly infecting a large number of fellow passengers.

According to the Federal Aviation Administration (FAA), air travel is down 95 percent from normal levels. As states and countries begin to slowly reopen, will people feel confident enough to get back on airplanes in the wake of COVID-19?

This visualization from Purdue University shows how tiny invisible droplets from a single cough can flow through the cabin of a Boeing 767 passenger jet. The model is based on the assumption that the 2003 SARS virus was airborne. ((Qingyan Chen/Purdue University School of Mechanical Engineering))

It's an open question. Passenger cabins have always posed a risk for transmission of all kinds of germs, thanks to close proximity, many multi-touch surfaces and a lack of fresh air.

Boeing has been experimenting with bathrooms that can sanitize themselves and kill 99.9 percent of germs and pathogens in mere seconds, according to the company. But most airlines were not planning for a major global pandemic.

“When you can easily sell your airplanes, you try to defer the problems to the future,” Qingyan Chen, a Purdue University engineering professor who helped lead a major FAA-funded research project on disease transmission aboard aircraft and has received research funding from Boeing, told The Washington Post. “Today we found that future is actually 2020.”

Breakthroughs are possible, however.

WHY ARE CHILDREN LESS AFFECTED BY CORONAVIRUS?

Ultraviolet lights that promise to destroy viruses without hurting humans are being tested by Columbia University scientists, who say the lights would be effective in airplane cabins, airports, hospitals and schools.

“As we speak, there are 100 hairless mice being exposed for 15 months,” David J. Brenner, director of Columbia’s Center for Radiological Research, explained to The Post. The mice apparently live under the lights for eight hours a day and get eye and skin tests every couple of weeks, and after eight months the researchers have found no damage, “which is encouraging," he said. 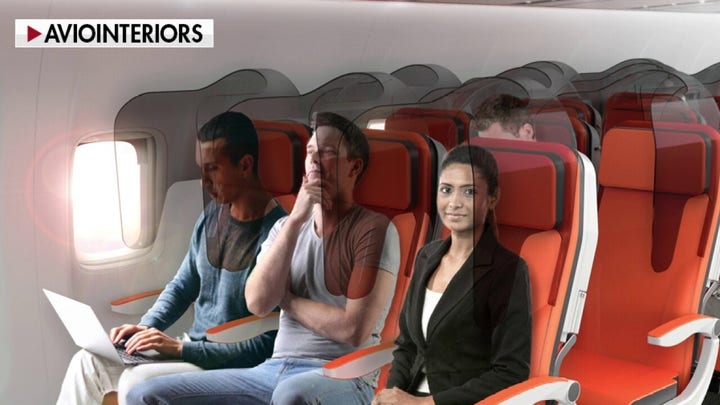 80 PERCENT OF WORKERS WOULD NOT FEEL SAFE IF THEIR STATE REOPENED NOW, STUDY REVEALS

For the study, Chen worked with Boeing engineers to determine whether changing an airplane’s ventilation system would affect the risk of contracting SARS, used as a stand-in for other dangerous viruses that might emerge.

Researchers found that passengers sitting with a SARS patient in a seven-row section of a Boeing 767 would have a one-in-three chance of getting sick from a 5-hour flight. On a shorter 737 flight, the risk was one in five. But they also discovered that changing the ventilation system -- for example, by having air flow into the cabin from near the floor rather than from above -- would cut the risk by half or more.

It's worth noting that the Purdue study assumed the virus that caused SARS could stay airborne for long periods, which is different from what the Centers for Disease Control and Prevention (CDC) says is typically occurring with the novel coronavirus.

Still, it remains to be seen how far the struggling airline industry -- which has received billions in stimulus funds -- will go.

Boeing recently announced a plan to lay off 16,000 workers, and a survey from the International Air Transportation Association, which represents carriers worldwide, found that 40 percent of recent passengers said they may wait at least six months after the outbreak is contained to travel again.

“It’s very hard for industry to change. ... It’s not like a flip of a switch,” added Chen, pointing to the expense of developing new features and getting them certified by the FAA. But those high costs also underscore the key role for government, he said.

“Regulation is very important. If you regulate that, then they will have to do something.”