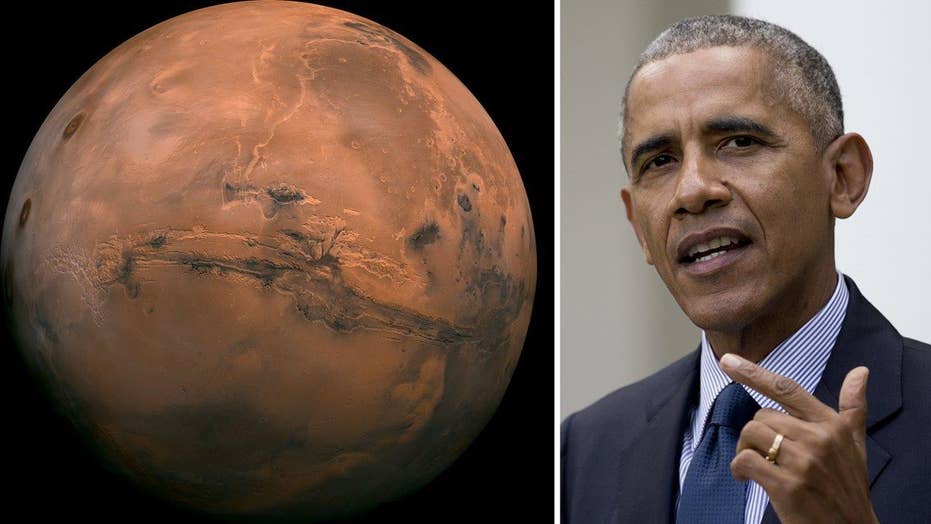 President Barack Obama wants NASA to send astronauts to Mars by the 2030s and eventually into deep space, he wrote in a CNN op-ed published today (Oct. 11).

"We have set a clear goal vital to the next chapter of America's story in space: sending humans to Mars by the 2030s and returning them safely to Earth, with the ultimate ambition to one day remain there for an extended time," Obama wrote in the op-ed. The president went on to discuss government partnerships with commercial partners to "build new habitats that can sustain and transport astronauts on long-duration missions in deep space," possibly referring to NASA's Next Space Technologies for Exploration Partnerships or "NextSTEP" program.

The president's announcement echoed his earlier vision for space exploration that became law in 2010, but placed new emphasis on venturing beyond Mars. [Photos: President Obama and NASA]

His message comes shortly before Obama is set to host America's top scientists, engineers and students at the White House Frontiers Conference in Pittsburgh on Thursday (Oct. 13). The purpose of the conference is to find ways to improve science, technology and innovation in the United States and to "find the next frontiers," the president wrote.

In response to the op-ed, NASA Administrator Charles Bolden wrote a blog post on the agency's website about Obama's revamped vision for space exploration and discussed two NASA initiatives "that build on the president's vision and utilize public-private partnerships to enable humans to live and work in space in a sustainable way."

The first initiative Bolden discussed is the "NextSTEP" program, which is laying the groundwork for missions to deep space by asking private companies to design space habitats. The second initiative has NASA fostering innovation on the International Space Station. For example, the space agency has asked the private sector to come up with ways to dock at and utilize the orbiting laboratory. NASA has committed to keeping up its current level of support for the station through 2024.

Obama wrote in the op-ed that the U.S. space program "represents an essential part of our character — curiosity and exploration, innovation and ingenuity, pushing the boundaries of what's possible and doing it before anybody else. The space race we won not only contributed immeasurably important technological and medical advances, but it also inspired a new generation of scientists and engineers with the right stuff to keep America on the cutting edge."

Near the beginning of Obama's presidency, he visited Kennedy Space Center and delivered a speech in which he called for "reimagining and reinvigorating our program to explore more of our solar system and look deeper into the universe than ever. … In the years since, we've revitalized technology innovation at NASA, extended the life of the International Space Station and helped American companies create private-sector jobs by capitalizing on the untapped potential of the space industry."

To sustainably settle the final frontier, Bolden wrote that the U.S. must continue "to take advantage of investment and innovation in both the public and private sectors."