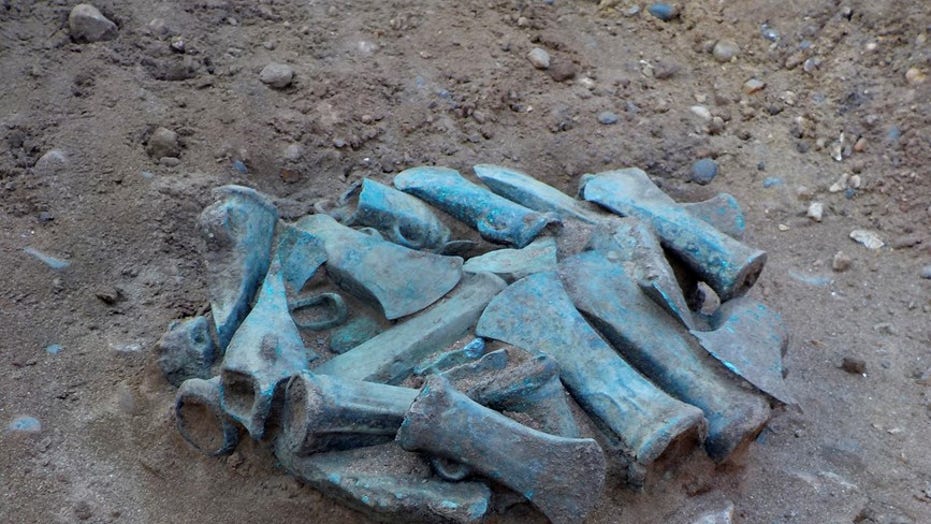 Archaeologists in the U.K. have uncovered a huge trove of ancient Bronze Age weaponry on the outskirts of London.

The hoard of 453 bronze objects is the largest ever discovered in London and the third-largest found in the U.K., according to heritage organization Historic England.

“This extraordinary discovery adds immensely to our understanding of Bronze Age life,” said Duncan Wilson, chief executive of Historic England, in a statement.

Unusually, the items were recovered from separate hoards within a large ancient ditch, experts say, noting that hoards are typically found in isolation. The objects date from around 900 to 800 B.C.

One of the hoards found in Havering on the outskirts of London. (© Archaeological Solutions Ltd)

Found within an ancient square enclosure on the northern edge of the River Thames, the weapons, which include sword fragments, are all either partially broken or damaged.

“The deliberate placement of these items may suggest a specialist metal worker operated in this area, and this large scale deposit of bronze may represent an accumulation of material akin to a vault, recycling bank or exchange,” explained Historic England in its statement. “Could this treasure have been a religious offering, were they hoping to recycle the metal, control access to the material, or was it merely a rejection of bronze tools that were becoming outdated with the emergence of iron technology?”

Dubbed “the Havering Hoard” after the area where the ancient objects were found, the items will go on display at the Museum of London Docklands in April 2020. The discoveries were made by archaeological contractor Archaeological Solutions ahead of a large quarrying project.

London continues to reveal new aspects of its rich history. The skeletons of a woman and child, for example, were recently discovered in the Tower of London, the first skeletons found at the famous historic site in 50 years.

The long-lost remains of Captain Matthew Flinders, the explorer credited with giving Australia its name, were discovered near a London railway station earlier this year. And in 2017, archaeologists uncovered the remains of Greenwich Palace, the birthplace of Henry VIII and Elizabeth I.

The ancient square enclosure where the trove was discovered. (© Archaeological Solutions Ltd)

In 2016, a historian discovered secret notes hidden in the text of England’s first printed Bible. The Latin Bible, which was published in 1535 by Henry VIII’s printer, revealed fascinating English annotations made during the 16th-century Reformation. Housed in the library of Lambeth Palace, which is the official London residence of the Archbishop of Canterbury, the Bible is one of just seven surviving copies.