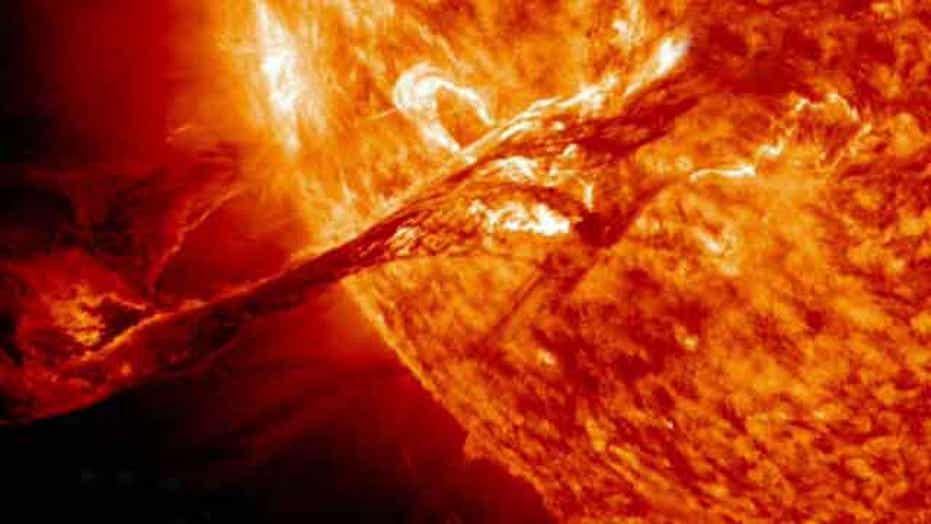 Sunny, with a mild chance of catastrophe?

A massive solar storm, like the one that knocked out radio communications all over the U.S. in 1958, is coming, and this time the devastation could total as much as $2 trillion, experts told FoxNews.com. Call it the perfect solar storm.

Wireless networks that power Blackberrys and iPhones here on earth, as well as GPS satellites that help pilots navigate planes in the skies, could be blacked out. And electric grids that power neighborhoods and whole cities could temporarily go down, said Professor Jose Lopez, a physicist at Seton Hall University.

'Given the explosion of delicate electronic devices ... we have become very vulnerable to solar outbursts.'

— John A. Bloom, a physicist at Biola University

“The concern of a strong solar flare in the direction of Earth is legit. The possibility that such a Sun burst could hit Earth could cause extensive damage as it would charge-up our electrical equipment and destroy them,” Lopez told FoxNews.com.

What starts as a multimillion-degree blast of fire from the sun cools over the vast distances of space. But what remains is a wave of energy that leaves satellites "highly charged" and damages components with its high current. Electronics are also damaged by high-energy particles that penetrate them and interfere with transmissions, as are electronics on Earth.

Solar maximum in 2013
The sun has an activity cycle, much like the hurricane season here on Earth, scientists tell FoxNews.com. And as it reaches a peak in activity, more solar flares and plasma will be hurled our way.

“The ramped up solar activity is to be expected through 2013, as it's the peak of the Sun's current 11-year cycle,” Lopez explained.

The whole solar storm could just pass us by, of course, like a giant hurricane that never quite makes landfall. Don’t over-react: the sun is not exploding. The end is not nigh.

“Solar weather forecasting is trickier than earth weather forecasting. Further, the entire solar weather process is not fully understood,” Lopez told FoxNews.com. “And predicting the future is unfortunately something that science can't do. Science can give us some potential scenarios of things that might happen, but who knows?”

But what if a big solar flare shot our way? High-voltage transformers that handle tremendous amounts of electrical power take months to build -- and they're built on demand. Should these transformers be destroyed by a solar flare, localized power outage issues could take years to solve.

Data transmissions from some satellites may be scrambled, causing serious noise in the imaging data, and a blackout of high frequency communications networks in the polar regions could make navigation nearly impossible in some cases.

“Given the explosion of delicate electronic devices in cell phones, personal computers, and automotive electronics over the past twenty years, we have become very vulnerable to solar outbursts like what is being predicted,” Professor John A. Bloom, a physicist at Biola University, told FoxNews.com.

But wait, it gets worse, scientists say. There are bio-hazards as well. High radiation could harm astronauts floating outside the international space station; passengers and crew in some high-flying aircraft may be exposed to radiation risk too.

Why is the Post Office screwing around with our DVDs?

Professor Ramon Lopez, a physicist at University of Texas, Austin, who develops space weather models for NASA, tells Fox News.com that science is still figuring out how to accurately measure and track the impact of these “storms from the sun.”

Along with flares come solar winds that leave the sun at a million miles an hour. The solar wind is constantly changing, and the Earth’s magnetic field is buffeted by these flares like a wind sock in gale-force winds.

Solar Activity
Solar activity has been at moderate levels for the past 24 hours. The largest solar event of the period was an M1 event observed at 13/0838Z from Region 1652. There are currently 6 numbered sunspot regions on the disk.

Solar activity is likely to be moderate with a slight chance for X-class flares on Jan. 14 - 16.

Geomagnetic Field
The field has been at quiet to unsettled levels for the past 24 hours. Solar wind speed, as measured by the ACE spacecraft, reached a peak speed of 317 miles per second at 13/2043Z.

The geomagnetic field is expected to be at quiet levels for the next three days.

It indicates that there will be quite a light show in the skies if the solar storm happens as forecast, with spectacular aurora displays to be seen throughout the Western hemisphere.

A comparable event occurred in 1859 -- a solar storm called the Carrington Event. Scientists tell FoxNews.com the impact of the impending solar storm maximum will be at least as big as the 1859 Carrington Event, which caused outages of telegraph networks, the Victorian era’s version of the Internet.

Another, more recent solar storm happened in 1958 and knocked out radio communications in the U.S. at the height of the Cold War, prompting fears that a hot war between the U.S. and Soviet Union had begun. During that event, the northern lights were seen as far south as Mexico.

Already, as of January 2013, the magnetic belts of the Sun have begun to turn very fast, indicating that a new storm is brewing. Data from NASA’s THEMIS satellite reveals that a 4,000-mile thick layer of solar particles has accumulated and continues to gather within the outermost part of the magnetosphere, a protective shield created by Earth’s magnetic field.

Why you should wait for the Galaxy S4

The Earth’s magnetosphere is supposed to block these solar particles, but this current build-up is expected to be at least 30-50 percent more powerful than the storms of the 1850s and 1950s, scientists say.

There’s nothing that mankind can do to prevent the storm. But humanity can prepare. NASA is sending warnings to airlines, power companies, and wireless companies about the possible impact on their operations. Back in 2005, a minor solar storm forced United Airlines to reroute 26 commercial flights, at a cost of $100,000 each in fuel costs, due to the impact on navigation systems. The aircraft were forced to fly non-polar routes to ensure their radio systems would not black out.