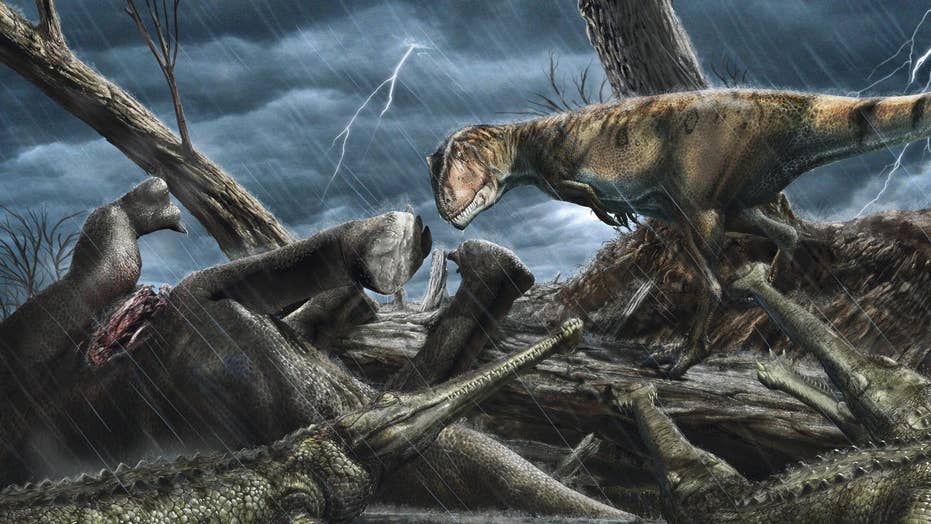 Scientists have revealed “the most dangerous place in the history of planet earth.”

An international team of paleontologists says that 100 million years ago, ferocious predators such as flying reptiles and crocodile-hunters made the Sahara no place for the faint-hearted.

The research is published in the journal ZooKeys. Experts based the study on 100 years of fossil vertebrate discoveries in an area of rock formations in southeastern Morocco, known as the Kem Kem Group.

"This was arguably the most dangerous place in the history of planet Earth, a place where a human time-traveller would not last very long,” said lead author Dr. Nizar Ibrahim, an assistant professor of biology at the University of Detroit Mercy and visiting researcher from the U.K.’s University of Portsmouth, in a statement.

The giant predatory dinosaur Carcharodontosaurus eyes a group of Elosuchus - crocodile-like hunters - near a carcass. (Artwork by Davide Bonadonna)

Experts explain that 100 million years ago, there was a vast river system in the area, and fossils from the three largest predatory dinosaurs have been discovered at Kem Kem. These include the sabre-toothed Carcharodontosaurus, which was over 26 feet long and the raptor Deltadromeus, which was around 26 feet in length.

The river system meant that there was a steady supply of fish for predators.

"This place was filled with absolutely enormous fish, including giant coelacanths and lungfish,” said co-author Professor David Martill, from the University of Portsmouth, in the statement. “The coelacanth, for example, is probably four or even five times [larger] than today's coelacanth. There is an enormous freshwater saw shark called Onchopristis with the most fearsome of rostral teeth, they are like barbed daggers, but beautifully shiny."

Experts from the universities of Detroit, Chicago, Montana, Leicester, Casablanca and McGill participated in the research, as did the Paris Museum of Natural History.

In a separate study, paleontologists recently announced the discovery of a new species of meat-eating dinosaur in Utah.

Last year, scientists also unveiled stunning research that sheds light on the 24 hours that followed the asteroid impact that wiped out the dinosaurs.