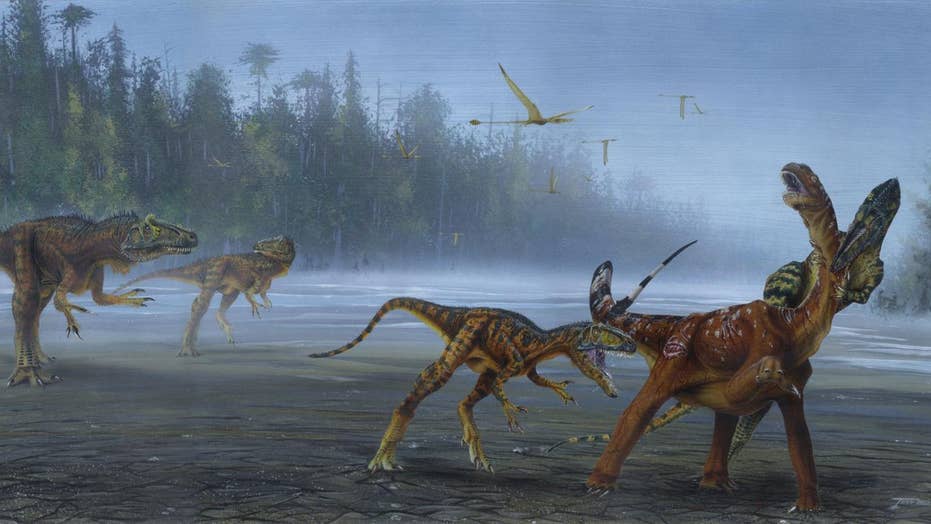 Paleontologists have announced the discovery of a new species of meat-eating dinosaur in Utah.

The first specimen of the dinosaur, recently named Allosaurus jimmadseni, was uncovered in Dinosaur National Monument in northeastern Utah in the early 1990s, according to the University of Utah. The dinosaur, which roamed western North America 157 million to 152 million years ago, is the oldest species of Allosaurus, experts say.

The discovery was announced Jan. 24 in the scientific journal PeerJ.

"Previously, paleontologists thought there was only one species of Allosaurus in Jurassic North America, but this study shows there were two species -- the newly described Allosaurus jimmadseni evolved at least 5 million years earlier than its younger cousin, Allosaurus fragilis," said study co-lead author Mark Loewen, research associate at the Natural History Museum of Utah and associate professor in the Department of Geology and Geophysics at the University of Utah, in a statement. "The skull of Allosaurus jimmadseni is more lightly built than its later relative Allosaurus fragilis, suggesting a different feeding behavior between the two."

Utah continues to offer fresh glimpses into its prehistoric past. In a separate project, for example, researchers unearthed a new species of ankylosaur, or armored dinosaur, in the Beehive State.

Last year scientists also unveiled stunning research that sheds light on the 24 hours that followed the asteroid impact that wiped out the dinosaurs.

The asteroid strike 66 million years ago has been compared to the power of 10 billion atomic bombs.

An international team of scientists led by the University of Texas at Austin examined hundreds of feet of rocks that filled the Chicxulub impact crater within the first 24 hours after impact. The Chicxulub crater is located offshore from Mexico’s Yucatan Peninsula.

Scientists explained that the asteroid sparked wildfires, triggered tsunamis and launched sulfur into the atmosphere, blocking out the Sun.

The asteroid strike is described as a “short-lived” regional inferno followed by a global cooling that killed off the dinosaurs.