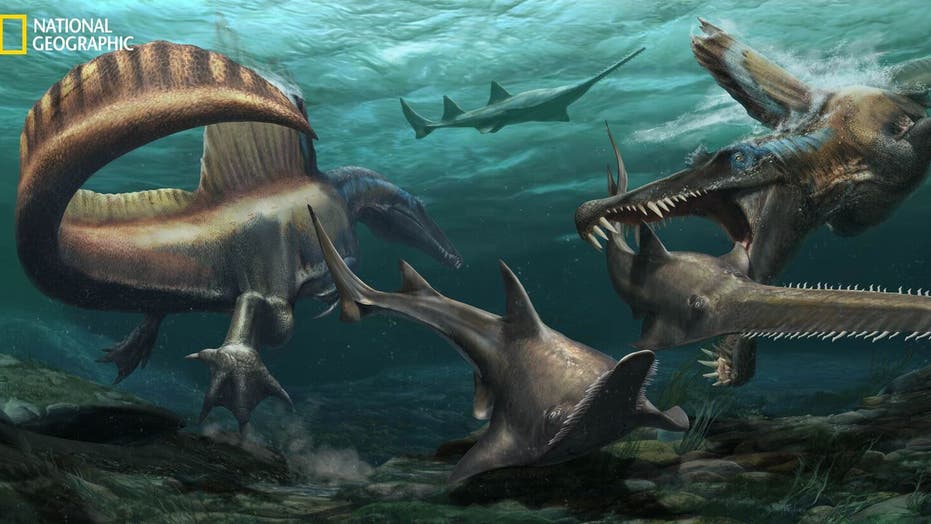 Researchers have discovered that Spinosaurus aegyptiacus, the terrifying aquatic dinosaur that lived 100 million years ago, had a powerful tail that enabled it to be accustomed to an aquatic lifestyle, the first time such an adaptation has been reported in a dinosaur.

According to the study, Spinosaurus had a "tail with an unexpected and unique shape" made up of "extremely tall neural spines and elongate chevrons, which forms a large, flexible fin-like organ capable of extensive lateral excursion."

"The Spinosaurus’  fin-like tail is a game-changing discovery for us that fundamentally alters our understanding of how this dinosaur lived and hunted -- it was actually a ‘river-monster,'" one of the study's co-authors, David Unwin, said in a statement.

Two SpinosaurushuntOnchopristis, a prehistoric sawfish, in the waters of the Kem Kem river system in what is now Morocco. (JasonTreat, NG Staff, and Mesa Schumacher Art: Davide Bonadonna)

“Not only did dinosaurs dominate the land and take to the air as birds, they even went back into the water and became the top predators there, as well," Unwin added.

A skeleton of the Spinosaurus, which was featured in "Jurassic Park III," was discovered in the Kem Kem River beds. This area in the present-day Sahara was recently described as "arguably the most dangerous place in the history of planet Earth."

“This dinosaur was actively pursuing prey in open water, not just standing in the shallows waiting for fish to swim by," the study's lead author, Dr. Nizar Ibrahim said in the statement.

Despite the fact that mosasaurs and plesiosaurs terrorized the ancient oceans of the planet, they are not considered dinosaurs.