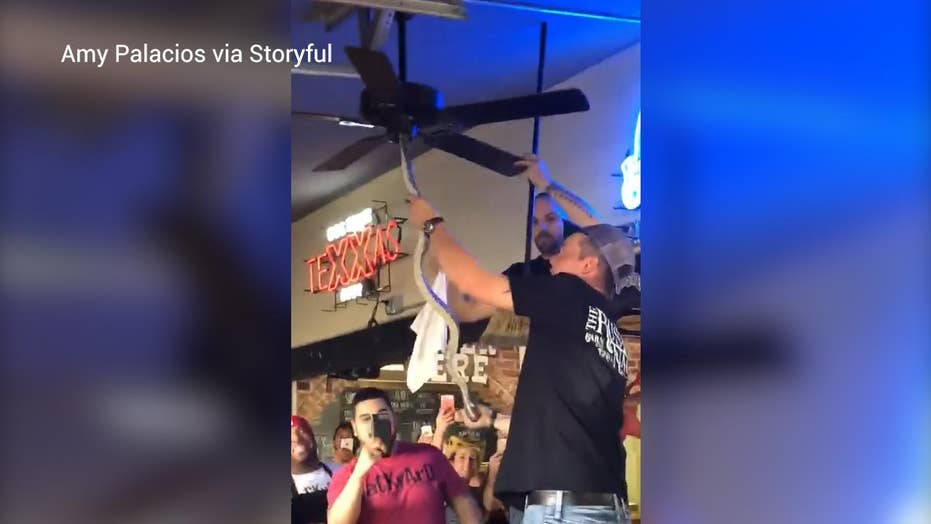 Staff members at the Backyard, a bar, grill and music venue in Waco, Texas, were forced to remove a snake from the establishment after the creature somehow entangled itself in the ceiling fan, all while concerned customers can be heard gasping and screaming.

A man in Cheatham County, Tennessee, caught and later killed a 6.5-foot timber rattlesnake that slithered through his backyard.

Rob Freeman caught the snake after his wife saw it while playing with their son in the backyard, The State reported.

Freeman reportedly called the Tennessee Wildlife Resources Agency before killing the snake, as the species are threatened or endangered in certain parts of the U.S., according to WKRN. In Tennessee, the snakes are “protected from harvest” and listed as "in need of management" according to the Tennessee Herpetological Society.

Freeman later posted a photo of the snake, which had reportedly just eaten a squirrel, to his Facebook page. He captioned the photo “Leg breaker.”

Timber rattlesnakes are the second-largest venomous snake in the eastern part of the U.S., according to the society. They typically range from 3 to 4.5 feet, though they can grow even longer.

Freeman was not immediately available for comment when contacted by Fox News on Friday.