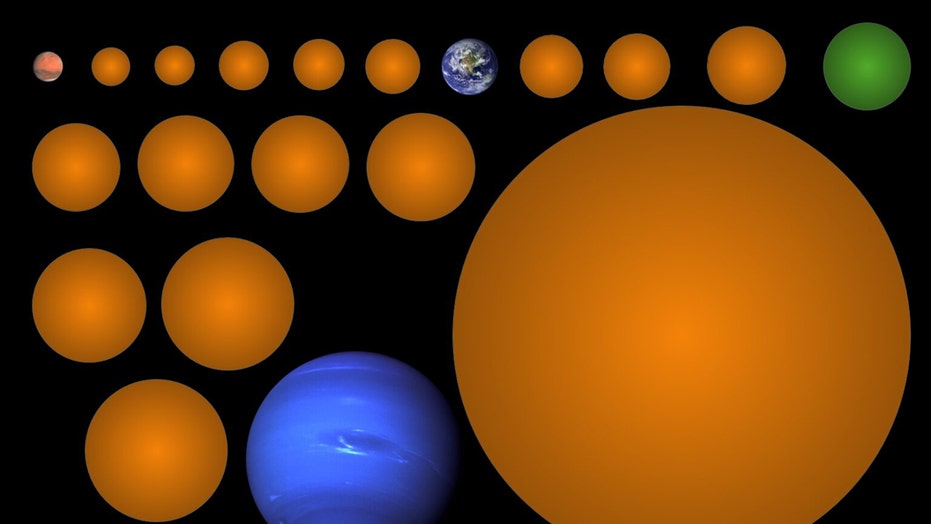 An astronomy student from the University of British Columbia has discovered 17 new exoplanets, including one that is roughly the same size as Earth.

Michelle Kunimoto, a Ph.D. candidate at the university, discovered the planets using NASA's Kepler Space Telescope, according to research published in The Astronomical Journal. One planet, KIC-7340288 b, is "small enough to be considered rocky," at just 1.5 times the size of Earth, and is in the habitable zone of the star it orbits.

"This planet is about a thousand light-years away, so we're not getting there anytime soon!" Kunimoto said in a statement. "But this is a really exciting find, since there have only been 15 small, confirmed planets in the Habitable Zone found in Kepler data so far."

Sizes of the 17 new planet candidates, compared to Mars, Earth, and Neptune. The planet in green is KIC-7340288 b, a rare rocky planet in the Habitable Zone. (Credit: Michelle Kunimoto)

One year on KIC-7340288 b is equivalent to 142.5 days and orbits its star at 0.444 astronomical units (AU), just slightly larger than Mercury's orbit around the Sun. One AU is approximately 93 million miles.

This isn't the first time Kunimoto has discovered planets. During her undergraduate years, she discovered four other exoplanets; these 17 were uncovered using the "transit method," which looks at the amount of light given off by a star, she added.

"Every time a planet passes in front of a star, it blocks a portion of that star's light and causes a temporary decrease in the star's brightness," Kunimoto explained. "By finding these dips, known as transits, you can start to piece together information about the planet, such as its size and how long it takes to orbit."

In January, Fox News reported that a 17-year-old intern at NASA during the summer of 2019 was just three days into his internship when he discovered the exoplanet TOI 1338 b, 1,300 light-years from Earth.