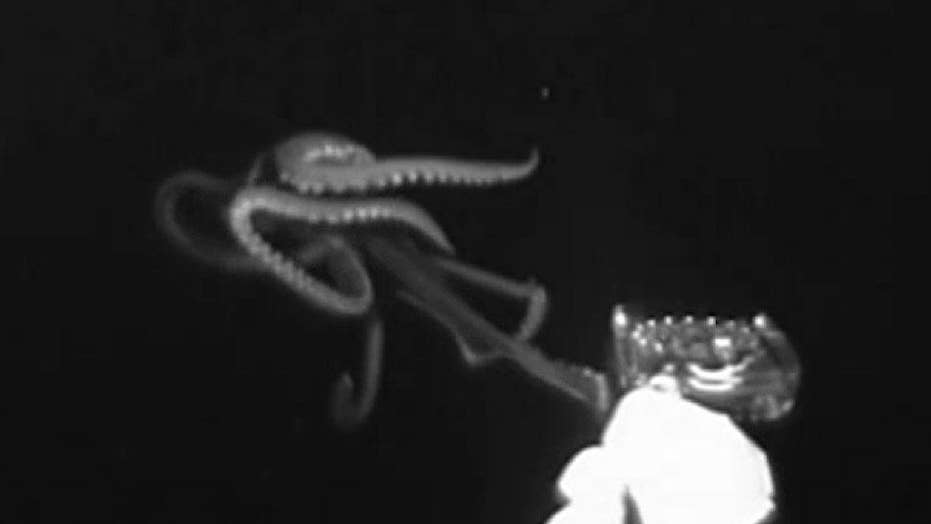 The National Oceanic and Atmospheric Administration discovered a giant squid in the Gulf of Mexico, measuring up to 12 feet in length.

Researchers last week captured a huge squid in the Gulf of Mexico as part of rare footage that biologists have described as "the most amazing video you've ever seen."

During a National Oceanic and Atmospheric Administration (NOAA) expedition, scientists said they spotted the giant cephalopod around 100 miles southeast of New Orleans, La.

MONSTER SQUID GOES VIRAL AFTER IT WASHED UP IN NEW ZEALAND

One biologist was scrolling through footage on Wednesday, and initially saw "the usual shrimp and other small animals," according to a NOAA blog post. But he quickly spotted "a large tubular animal off on the corner of the screen."

That creature turned out to be a large squid — which researchers estimated to be roughly 10 to 12 feet long. An expert with NOAA National Marine Fisheries Services confirmed it to be a juvenile giant squid.

The team used a "stealth camera system" called the Medusa in their deep sea exploring. Described as "unobtrusive," the machine — which was on its fifth deployment into the deep sea — uses red lights that aren't visible to the creatures that live deep within the ocean and isn't noisy. The machine baits creatures with an electronic jellyfish, which imitates the deep sea Atolla wyvillei jellyfish."

The giant squid the team spotted in the Gulf of Mexico backed off from the Medusa once it realized the "e-jelly" was not food.

"We did not find a monster," researchers made clear in the post about their journey. "The giant squid is large and certainly unusual from our human perspective, but if the video shows anything of the animal's character, it shows an animal surprised by its mistake, backing off after striking at something that at first must have seemed appealing but was obviously not food."