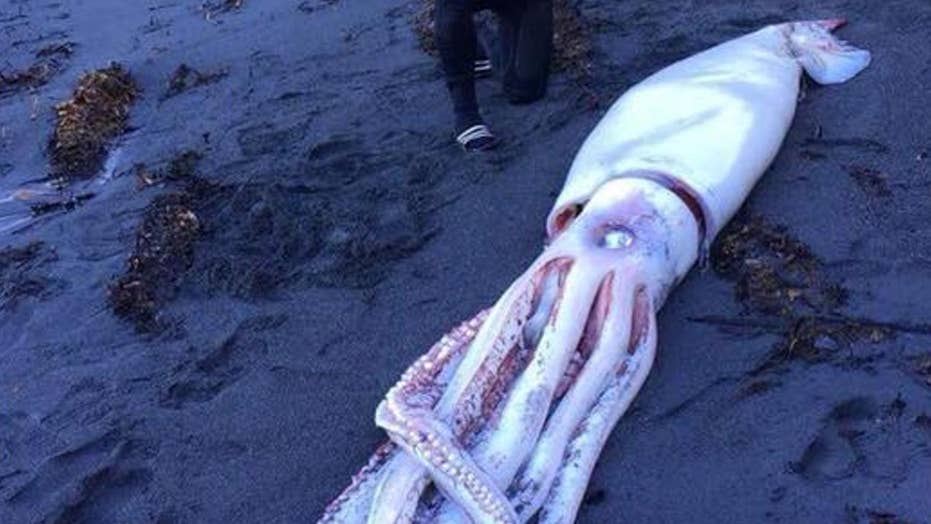 Three brothers stumbled upon a 14-foot giant squid on the shores of Wellington, New Zealand.

An enormous 14-foot squid has washed up on the shores of Wellington, New Zealand, prompting images of the colossal cephalopod to go viral.

Three brothers, Dan, Jack and Matthew Aplin, stumbled upon the find on Saturday. Dan is a member of the Ocean Hunter Spearfishing & Freediving Specialists in Wellington, which posted several images of the impressive squid to its Facebook page.

"Wellington team member Dan had an interesting find in Wellington this morning!" the Ocean Hunter Spearfishing & Freediving Specialists captioned the images. The post had been shared almost 6,000 times as of Monday morning.

The Aplin brothers said they were driving on a track near Red Rocks Reserve when they they spotted the squid. They then called the National Institute of Water and Atmospheric Research, which scheduled to have the squid picked up, according to The Sun.

Giant squids of this size are not uncommon, according to National Geographic. They can grow as large as 33 feet, nearly as large as a school bus, weighing up to 440 pounds.

The largest giant squid ever measured came in at 43 feet and weighed nearly a ton, according to Smithsonian Ocean.

Despite being one of the world's largest invertebrates, not much is known about giant squid, due largely to their deep-sea habitats. Scientists have really only been able to study them when they wash up ashore. However, in 2006, Discovery Channel caught a giant squid on film for the first time ever.

Giant squids and their even larger cousin, the colossal squid, have enormous eyes, measuring 10 inches in diameter, allowing them to see through the murky waters of the deepest parts of the ocean.

The colossal squid is estimated to be between 39 and 46 feet in length and can weigh up to 750 pounds.

As is the case with other types of squid, giant squids have eight arms and two tentacles used for feeding that extend and capture food. They largely eat deep-sea fish and other squid and have only a few predators, including sperm whales, deep-sea sharks and potentially pilot whales.