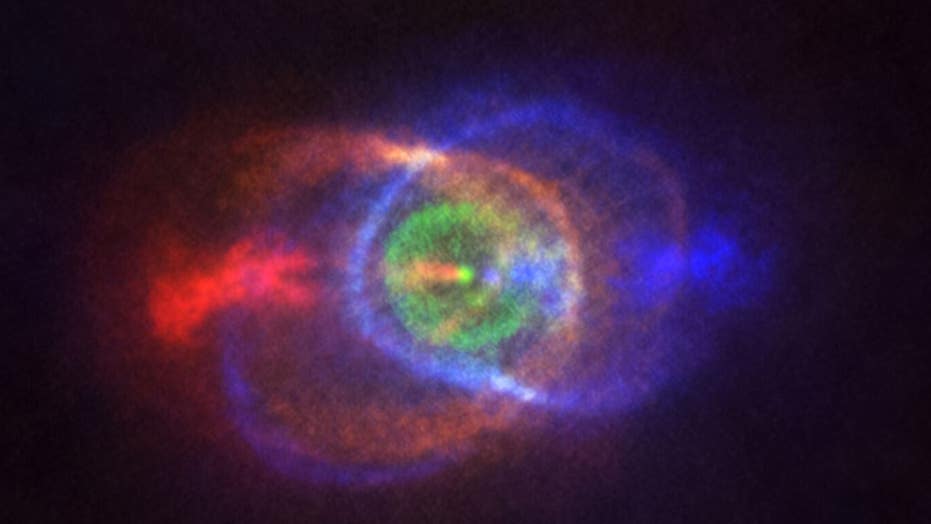 Astronomers were able to observe the binary star system known as HD101584 by using the Atacama Large Millimeter/submillimeter Array (ALMA) and saw a strange gas cloud that they think resulted from the two stars doing battle, according to a European Southern Observatory (ESO) statement.

The new observations from ALMA have shown scientists that what happened with HD101584 was something like a stellar confrontation.

The main star grew large enough to swallow its lower-mass partner. In response, the ESO explains, the smaller star zoomed towards the giant’s core but didn’t collide with it. Instead, the larger star was triggered into an outburst, scattering its gas layers and exposing its core.

SEALS SEEN CLAPPING UNDER WATER AS SHOW OF STRENGTH

“This stunning image of the circumstellar environment of HD101584 would not have been possible without the exquisite sensitivity and angular resolution provided by ALMA," co-author Elizabeth Humphreys, from ESO in Chile, said in the statement.

Researchers hope to gain more insights into the final evolution of stars like our sun.

“Currently, we can describe the death processes common to many Sun-like stars, but we cannot explain why or exactly how they happen. HD101584 gives us important clues to solve this puzzle since it is currently in a short transitional phase between better studied evolutionary stages. With detailed images of the environment of HD101584 we can make the connection between the giant star it was before, and the stellar remnant it will soon become,” said co-author Sofia Ramstedt, from Sweden's Uppsala University, in the statement.

Their research was published in the March issue of the journal Astronomy & Astrophysics.