The capsule from the California company founded in 2002 by entrepreneur Elon Musk didn’t include actual crew members – except for a life-size dummy named Ripley, who was named after the lead character in the “Alien” movies. The mission is a test to win the approval of NASA, which is set to use the technology later this year if all goes well.

The Crew Dragon is expected to reach the space station Sunday morning, merely 27 hours after liftoff. The capsule will then spend five days docked to the orbiting outpost and then return to Earth on Friday, landing in the Atlantic.

NASA hopes to test the technology in the summer with human astronauts aboard.

This photo provided by SpaceX shows a test dummy in the new Dragon capsule designed for astronauts. (SpaceX via AP)

“This is critically important. ... We’re on the precipice of launching American astronauts on American rockets from American soil again for the first time since the retirement of the space shuttles in 2011,” said NASA Administrator Jim Bridenstine, to whom Musk gave a special tour of the pad on the eve of the launch.

About 5,000 NASA and contractor employees, tourists and journalists gathered Saturday to watch the launch. The SpaceX company employees cheered until the capsule reached orbit.

Two NASA astronauts, Doug Hurley and Bob Behnken, watched the spectacle from Kennedy’s Launch Control. They are expected to be on the capsule's crew this summer.

Following the retirement of American shuttles, NASA paid companies such as SpaceX and Boeing about $8 billion to build and operate crew capsules to carry astronauts to and from the space station. 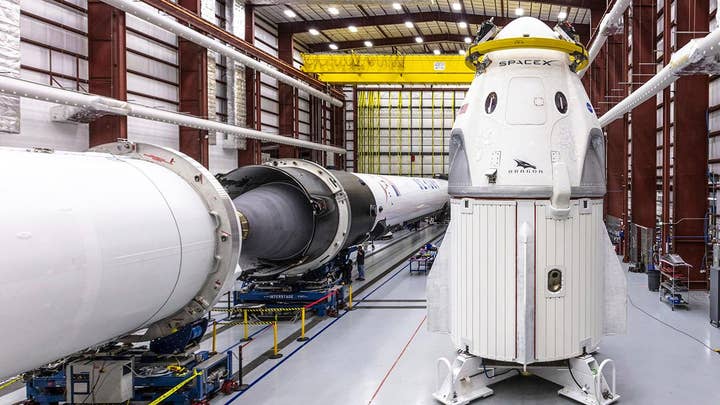 The only way astronauts can get to space are via Russian rockets, yet the cost of using them has steeply risen over the years. NASA currently pays $82 million per seat.

Boeing said it expects to test-fly its Starliner capsule next month, with astronauts on board possibly in August.

Bridenstine is optimistic about both SpaceX and Boeing capsules, saying astronauts should begin using them by this year’s end.

“We are not in a space race,” he said. “That race is over. We went to the moon and we won. It’s done. Now we’re in a position where we can take our time and make sure we get it right.”