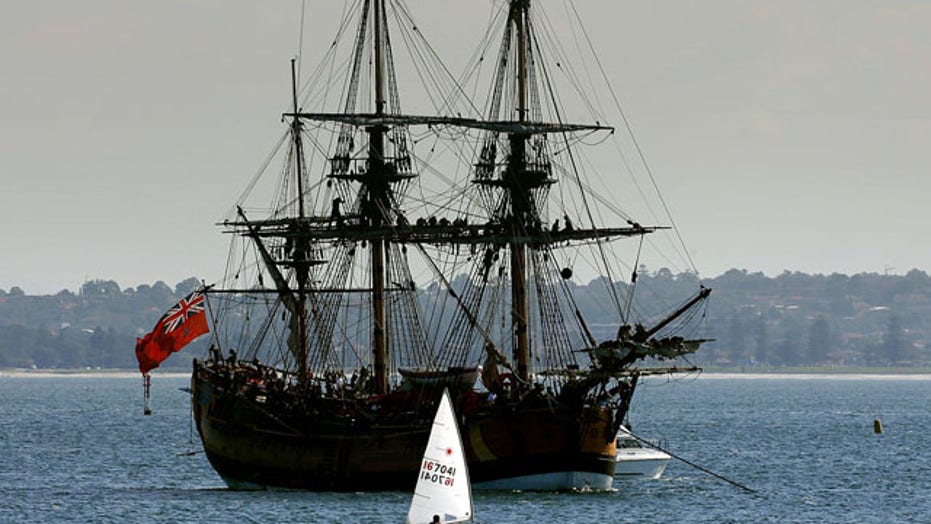 A mysterious shipwreck at the bottom of Newport Harbor is believed to be the famous HMS Endeavour, which Capt. James Cook sailed on when he discovered Australia. Marine archaeologists are ramping up their efforts to confirm that the wreck is indeed Cook’s historic ship.

Endeavour, which was renamed Lord Sandwich, is one of 13 ships scuttled in Newport Harbor in 1778, according to the Rhode Island Marine Archaeology Project (RIMAP). Lord Sandwich had been used to transport troops during the American Revolution and was scuttled in the days leading up to the Battle of Rhode Island.

RIMAP recently released images and 3D scanning data of the wreck in a report on its dives to the site this year. “The excavation exposed artifacts and ship's structure to confirm that this site is an 18th-century shipwreck,” the organization said in a statement. “The excavation exposed artifacts and samples, including sheaves, and other wood fragments, bits of leather, textiles, glass, and ceramics, samples of coal and charcoal, ballast and worked stone including gun flints.”

However, more work is needed to conclusively confirm that the wreck is the historic ship.

Marine archaeologists have been excavating the shipwreck site. (Photo by John Cassese © RIMAP 2019)

“Although this site still looks promising, there is still no hard evidence that it is the Endeavour,” RIMAP said. “But more importantly, there is nothing to say that it is one of the other vessels that was part of the Newport fleet of transports and victuallers [provisions ships] that were scuttled nearby in Newport's Outer Harbor in 1778.”

RIMAP Executive Director Kathy Abbass, Ph.D. told Fox News that Endeavour was originally a coal ship called The Earl of Pembroke that was taken into the Royal Navy for Cook's circumnavigation of the globe and later became Lord Sandwich.  "There is a great deal known about the Endeavour and very little, if anything, known about the construction of the other ships in the same fleet that was scuttled in Newport Harbor in 1778," she explained, via email. "In the absence of reliable data about those other vessels, all we can say is whether or not this particular shipwreck site is consistent with what is known about the Endeavour, and that as yet we see nothing to say it isn't."

Samples from the wreck site will undergo testing in RIMAP’s lab in the Herreshoff Marine Museum in Bristol. Analysis of the samples “may provide the evidence needed to prove this site is the Lord Sandwich ex Endeavour,” according to RIMAP.

LiveScience reports that samples of the ship’s keel could reveal that elm wood was used in its construction. Elm wood was also used in the Endeavour’s keel, according to the news outlet.

"Now that the intense 2019 field season is over, the next steps are to continue intermittent work on the site to secure the excavated areas, remove gear, and to continue photography during the colder weather when the water is clearer than in the summer," Abbass told Fox News. "At the same time we have a great deal of work to do at the lab to conserve and study the artifacts and samples, and to analyze the other data collected during the excavation. It is hard to estimate how long that will take, but we will share those results."

REMAINS OF US REVOLUTIONARY WAR FRIGATE DISCOVERED OFF UK COAST

Constructed in Yorkshire in the north of England, the Endeavour was a barque, or three-masted sailing ship.

Part of the ship's rigging is exposed.

RIMAP used a grant from the Australian National Maritime Museum to locate documents in London that identify the groups of ships in the 13-vessel fleet, and where each group was scuttled. "It has taken 27 years from RIMAP's first remote sensing of Newport's Outer Harbor to find the 1778 transport fleet, and it has been 21 years since we first thought the Lord Sandwich might have been the Endeavour," said Abbass. "The lack of funding is the main reason for RIMAP's slow progress, but our partnership with the Australian National Maritime Museum has been the support that allows us to do such exciting work together."

In their recent excavation of the site, archaeologists were able to shed new light on how the ships in the fleet were scuttled. “The past presumption was that holes were cut in their bottoms to allow the ships to sink, but there had been no historic evidence discovered to describe the details of that action,” RIMAP said in the statement.

The non-profit organization continued: “However, the current excavation near the keel has found such a hole cut through the bottom, suggesting that the location of the holes was also part of the decision-making for how to sink the vessels most efficiently. That is the sort of small detail that increases the understanding of how these ships were managed, and it is an important contribution of marine archaeology to maritime history research, too.”

Part of a barrel head at the shipwreck site. (Photo by John Cassese © RIMAP 2019)

RIMAP noted that, in addition to her famous voyages of discovery, and her later role as troop transport, the Endeavour/Lord Sandwich was also used as a prison ship during the Revolutionary War. While experts do not expect to find any artifacts related to Cook, they do expect to find evidence of documented repairs that were done to the ship during its lifetime. "If we find items associated with those later uses, then they will support the conclusion that this site is the Lord Sandwich," Abbass told Fox News. And since the Lord Sandwich was the Endeavour that was the Earl of Pembroke, then we know we have the right archaeological site to be that iconic vessel."

"So it will take a combination of data about the ship's structure that is congruent with what is known about the Endeavour, and that the artifacts are congruent with what is known of the Lord Sandwich," Abbass added. "Even if this site turns out not to be the Endeavour, all of the ships in that transport fleet that we have found and mapped are important to US history and the Revolutionary War."

Other Revolutionary War wrecks have grabbed attention in recent years. The wreck of what appears to be a British ship destroyed during the siege of Yorktown in 1781 was discovered in Virginia earlier this year.

Crew members sit atop the masts of a replica of the famous 18th century ship The Endeavour in Botany Bay file photo. (REUTERS)

Experts from JRS Explorations spotted the wreck, which is believed to be the armed transport ship ‘Shipwright,’ in the York River in June.

Last year, the remains of the famous Revolutionary War frigate, USS Bonhomme Richard, were discovered off the coast of the U.K., more than 200 years after it sank following a naval battle.

Also in 2018, a Nor’easter uncovered the remains of a Revolutionary War-era ship on a beach in Maine.

In 2015, a Revolutionary War-era ship was unearthed at a construction site in Alexandria, Va.

A 22-gun British warship that sank during the American Revolution regarded as one of the "Holy Grail" shipwrecks in the Great Lakes was discovered at the bottom of Lake Ontario in 2008.