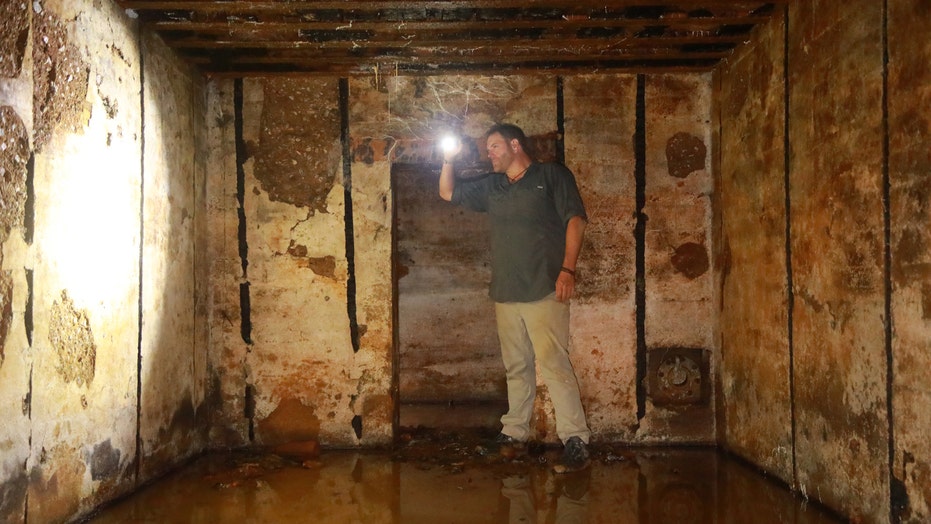 Researchers have uncovered secret Nazi bunkers in Normandy that were used against U.S. forces at the D-Day landings during World War II.

The discovery will be featured in the season premiere of “Expedition Unknown,” which airs on Discovery Channel on Feb. 5 at 8 p.m. EST.

“We discovered huge Nazi bunkers that haven’t seen the light of day in 75 years,” Josh Gates, host and executive producer of "Expedition Unknown," told Fox News. “We were able to dig down and reveal the doors and go inside them – they are frozen in time, there are artifacts inside there.”

“It’s two large bunkers, each one of them contains three or four large rooms,” he said. “These are fairly large structures with hallways and multiple rooms, staircases.”

The bunkers are part of a complex known as the Maisy Battery that is about 2 miles inland from Omaha beach. When it was operational, the battery had a total of 14 huge guns, including 150 mm Howitzers.

Experts used LiDAR (Light Detection and Ranging) technology, which uses a laser to measure distances to the Earth’s surface, to study the site.

HOW D-DAY TECHNOLOGY MADE OPERATION OVERLORD A SUCCESS

LiDAR can prove extremely valuable to study structures that are hidden out of sight or in areas with thick vegetation. The technology is also used extensively in other applications, including autonomous cars where it allows vehicles to have a continuous 360 degrees view.

The end of a gas mask filter that was found in the newly excavated WWII bunker at Maisy Battery, France. (Discovery Channel)

Researchers found evidence on the bunker’s ceiling that indicates it was burned, either during the firefight to capture the site or afterward. “It’s a strange feeling entering a place like that,” Gates added. “It’s exciting – on the other hand, it’s a somber, dark experience – this was a place that housed Nazi soldiers.”

The Maisy Battery is now open to the public, although, as Gates found, the complex is still revealing its secrets. The Battery was one of the largest German defensive positions in the landing area used by U.S. Forces on D-Day, according to its website, and was used to target the Omaha and Utah beachheads. The base was captured by U.S. Army Rangers.

"The Maisy Battery played a crucial part in the events of D-Day,” explains its website. “The German Army had built Maisy in total secrecy, whilst letting the world know all about the nearby battery at Pointe du Hoc, a position that was under construction on D-Day.”

The entrance to an unearthed WWII bunker at Maisy Battery, France. (Discovery Channel)

“It’s an overwhelming place to visit – this was part of one of the darkest chapters in modern history,” said Gates. “There’s all sorts of things inside the bunker, we discovered the remains of gas masks, ammunition, Nazi helmets.”

“What is unique is that a lot of the military installations around Normandy have been cleaned up,” he continued. “Maisy is one of the few places where you can explore trenches and beaches and get a sense of what it was like on D-Day.”

Excavations at the Maisy Battery will continue, according to the explorer, who notes that the site was once part of the infamous “Atlantic Wall” – a chain of defensive installations built by the German military on the coast of Northern France.

Members of a US, Ranger unit are packed shoulder to shoulder an a small landing craft at a British port, before embarking for the landing on the Normandy beaches in France (D-Day -June 6, 1944). (Photo by Photo12/UIG/Getty Images)

“A lot of Hitler’s Atlantic Wall was not on the sea,” Gates explained. “Big compounds like this were essentially forgotten to time.”

Researchers made another startling discovery during their filming in late 2019. The team was investigating the nearby wreck of the USS Partridge, a minesweeper that was sunk by a torpedo during the Normandy landings when they spotted German parachute mine.

Gates explained that the French navy was alerted, but noted that the area where the mine is located has been experiencing bad weather. “The idea is, in the coming months, to have a team from the French navy come out there and detonate the mine," he told Fox News.

In other projects, experts have been looking to unlock the sinister secrets of hidden Nazi bases dotted across Europe.

In 2016, scientists at the Russian Arctic National Park discovered the remains of a secret Nazi base on the remote island of Alexandra Land, in the Franz Josef Land archipelago.

Other excavations have also offered a glimpse into the horrific events of World War II. In 2017, experts uncovered two ritual baths in the remains of the Great Synagogue of Vilnius, in Lithuania, more than 70 years after its destruction during the Holocaust.