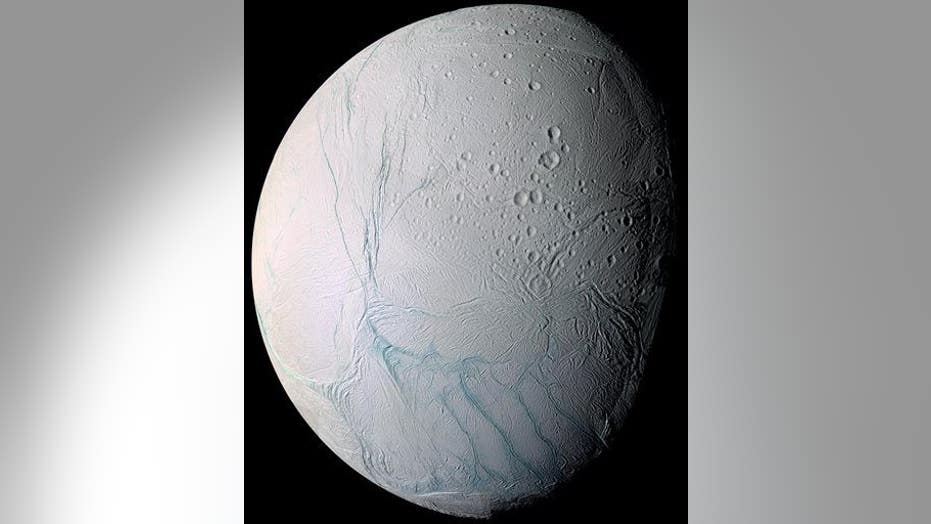 Saturn's moon Enceladus has been shrouded in mystery since its discovery in the late 18th century, but now researchers believe they have solved what causes the moon's "tiger stripes," according to a new study.

The "tiger stripes," which were first spotted by NASA's Cassini spacecraft, are evenly spaced fissures, approximately 130 kilometers long and 35 kilometers apart. Icy material from Enceladus' ocean gets shot into them, an observation that has stumped scientists.

“First seen by the Cassini mission to Saturn, these stripes are like nothing else known in our Solar System,” the study's lead author, Doug Hemingway, said in a statement. “They are parallel and evenly spaced, about 130 kilometers long and 35 kilometers apart. What makes them especially interesting is that they are continually erupting with water ice, even as we speak. No other icy planets or moons have anything quite like them.”

Due to its odd orbit, Enceladus, the sixth-largest of Saturn's 62 confirmed moons, isn't frozen solid, despite it being icy. So it stretches the ice sheets, which are thin and easily split open, the researchers found. It just so happens the stripes on the south pole cracked ahead of those on the north pole.

The first stripe, named after the city of Baghdad, stayed open, causing the other stripes to become parallel. As the water rose from the first strip, the "stripes" formed.

“Our model explains the regular spacing of the cracks,” the study's co-author, Max Rudolph, added. He also pointed out that the weight of the icy material that falls back "caused the ice sheet to flex just enough to set off a parallel crack about 35 kilometers away.”

Hemingway and the other researchers noted that they've been able to study Enceladus' ocean, thanks to these fissures, which continue to widen and narrow over time.

“Since it is thanks to these fissures that we have been able to sample and study Enceladus’ subsurface ocean, which is beloved by astrobiologists, we thought it was important to understand the forces that formed and sustained them,” the researcher said. “Our modeling of the physical effects experienced by the moon’s icy shell points to a potentially unique sequence of events and processes that could allow for these distinctive stripes to exist.”

The research has been published in the scientific journal Nature Astronomy.

Enceladus continues to fascinate researchers. Earlier this year, researchers determined its ocean is likely 1 billion years old, placing it in the sweet spot for supporting life. Last year, researchers acknowledged that they had found the "building blocks" for life on Enceladus, having discovered complex organic molecules.

In 2017, NASA found the presence of hydrogen in its atmosphere, something Linda Spilker, Cassini project scientist at NASA’s Jet Propulsion Laboratory, said at the time could be meaningful.

"It could be a potential source for energy from any microbes," Spilker said at the time. "We now know that Enceladus has almost all of the ingredients you would need for life here on Earth."

Enceladus is not the only celestial satellite of Saturn to intrigue scientists. In June, NASA announced the latest mission in its New Frontiers program. Known as Dragonfly, the mission will explore Saturn's largest moon, Titan, which could potentially host extraterrestrial life.