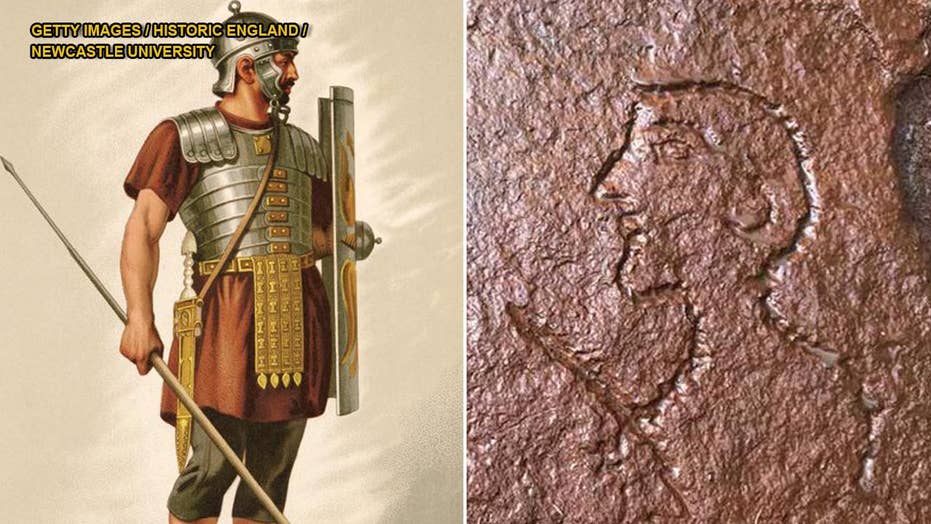 Archaeologists in the U.K. are attempting to record the unique inscriptions carved into the walls of a quarry, known as the written rock of Gelt. The quarry provided stones for the construction of Hadrian's Wall, and the carvings offer a smutty glimpse into the lives of the Roman soldiers. The inscriptions include a caricature of an officer and a phallus, as well as a reference to the consulate of Aper and Maximus.

An ancient quarry near Hadrian’s Wall in northern England offers a smutty glimpse into the lives of the Roman soldiers who built the famous fortification.

Archaeologists from the U.K.’s Newcastle University and Historic England are working to record the unique inscriptions carved into the walls of the quarry, which provided stone for Hadrian’s Wall.

The sandstone inscriptions include a caricature of an officer and a phallus, which denoted good luck in Roman culture.

Other carvings at the quarry in Gelt Forest have helped experts date the rare inscriptions. One inscription, for example, describes ‘APRO ET MAXIMO CONSVLIBVS OFICINA MERCATI,’ a reference to the consulate of Aper and Maximus. This dates the inscription to 207 A.D., a time when Hadrian’s Wall was undergoing a major renovation, according to Historic England.

The caricature of a Roman officer cut into the ancient quarry near Hadrian's Wall. (Historic England/Newcastle University)

“These inscriptions at Gelt Forest are probably the most important on the Hadrian’s Wall frontier,” said Mike Collins, Historic England’s inspector of ancient monuments for Hadrian’s Wall, in a statement. “They provide insight into the organization of the vast construction project that Hadrian’s Wall was, as well as some very human and personal touches, such as the caricature of their commanding officer inscribed by one group of soldiers.”

Known as the written rock of Gelt, local people and experts were able to view the inscriptions up close until the 1980s, when a path to the quarry collapsed into the gorge of a nearby river. The soft sandstone into which the inscriptions were cut is also slowly eroding.

A new project, however, aims to record the carvings. Archaeologists will use ropes from above the quarry to access the inscriptions, which will be laser scanned. The scans will then be used to create a 3D digital model of the rock surfaces, giving the public an up-close view of the inscriptions for the first time in 40 years.

Roman graffiti carved into the soft sandstone of the quarry in Gelt Forest. (Historic England)

“These inscriptions are very vulnerable to further gradual decay,” said Ian Haynes, professor of archaeology at Newcastle University, in a statement. “This is a great opportunity to record them as they are in 2019, using the best modern technology to safeguard the ability to study them into the future.”

Construction of the wall began in 122 A.D. on the orders of Emperor Hadrian, who was visiting Britain at that time.

A World Heritage site, the 73-mile wall stretched across the U.K. from what is now Wallsend in the east to its western end at Bowness-on-Solway.

The Roman quarry was used in the construction of Hadrian's Wall. (Historic England)

Last year archaeologists unearthed boxing gloves at the site of Vindolanda, an ancient Roman fort just south of Hadrian’s Wall. A mysterious bronze hand was also discovered during an excavation at Vindolanda.

In 2017, a trove of artifacts, including Roman swords, was discovered at the former fort. Researchers also found 25 wooden ink documents at Vindolanda, offering a fascinating glimpse into everyday life in the Roman Empire.

Elsewhere in the U.K. other Roman sites have been revealing their secrets, such as mysterious villa at Abermagwr in west Wales and a 2,000-year-old cemetery in Lincolnshire.

File photo - A reenactor dressed as a Roman soldier stands guard looking out over the countryside of Cumbria from the Birdoswald Roman Fort as the lives of Roman Legionnaires are re-enacted during the Hadrian's Wall Live event on Sept. 3, 2016 in Carlisle, England. (Photo by Ian Forsyth/Getty Images)

Archaeologists in Leicester also unearthed a 1,600-year-old Roman mosaic and lifted it out of the ground. The mosaic floor, which dates from the late 3rd or early 4th century A.D., was discovered next to a parking lot by the same team that found the remains of Richard III in the city.

In 2014, a stunning hoard of ancient silver, believed to have been used as bribes by Romans, was found with a metal detector by a teenager in Scotland.