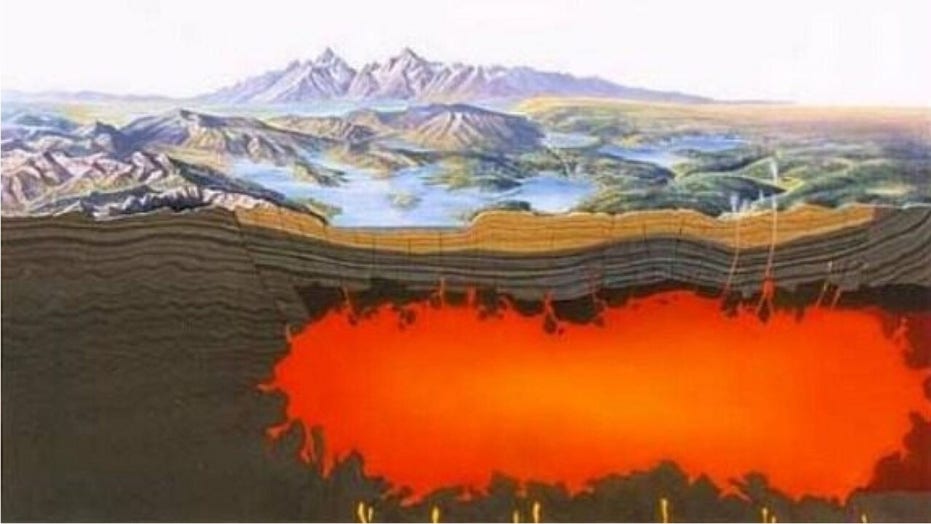 A newly released study suggests that the Yellowstone supervolcano may actually be waning.

Fears of the Yellowstone supervolcano erupting have cropped up from time to time, but a newly released study suggests that the hotspot may actually be waning.

The research, published earlier this month in the journal Geology, points out two new eruptions that emanated from the Yellowstone supervolcano over the past 9 million years, including one experts believe is the "volcanic province’s largest and most cataclysmic event." The new discoveries suggest the intensity of the hotspot is waning drastically.

“It therefore seems that the Yellowstone hotspot has experienced a three-fold decrease in its capacity to produce super-eruption events,” said the study's lead study author, Thomas Knott, in a statement. “This is a very significant decline.”

Yellowstone is an active volcano. Surface features such as geysers and hot springs are direct results of the region's underlying volcanism. (National Park Service)

A NEW SUPERVOLCANO IS BREWING UNDER MASSACHUSETTS, VERMONT AND NEW HAMPSHIRE

The researchers were able to uncover the supereruptions by looking at volcanic deposits in Idaho and Nevada and using seven different characteristics, including color of rock, the rock's age and its chemical composition.

The first "supereruption," which occurred 9 million years ago, is known as the McMullen Creek supereruption and impacted a nearly 4,600-square-mile stretch of modern-day Idaho.

The second supereruption, known as the Grey’s Landing super-eruption, however, was significantly larger. It impacted nearly 8,900 square-miles and occurred 8.72 million years ago.

“It is one of the top five eruptions of all time," Knott explained, adding that the eruption "enameled an area the size of New Jersey in searing-hot volcanic glass that instantly sterilized the land surface.”

“Particulates would have choked the stratosphere,” Knott continued, explaining that the eruption was “raining fine ash over the entire United States and gradually encompassing the globe.”

The Yellowstone supervolcano has erupted at least 10 times over the past 16 million years, according to LiveScience.

"The discoveries show the effectiveness of distinguishing and tracing vast deposit sheets by combining trace-element chemistry and mineral compositions with field and paleomagnetic characterization," researchers wrote in the study's abstract. "This approach should lead to more discoveries and size estimates, here and at other provinces. It has increased the number of known super-eruptions from the Yellowstone hotspot, shows that the temporal framework of the magmatic province needs revision, and suggests that the hotspot may be waning."

The most recent eruption at the Yellowstone supervolcano happened 630,000 years ago, which Knott said suggests "we may have up to 900,000 years before another eruption of this scale occurs,” before acknowledging this is not exact and continuous monitoring of the region "is a must."

A study published in 2017 suggested the Yellowstone supervolcano could erupt faster than experts previously believed.