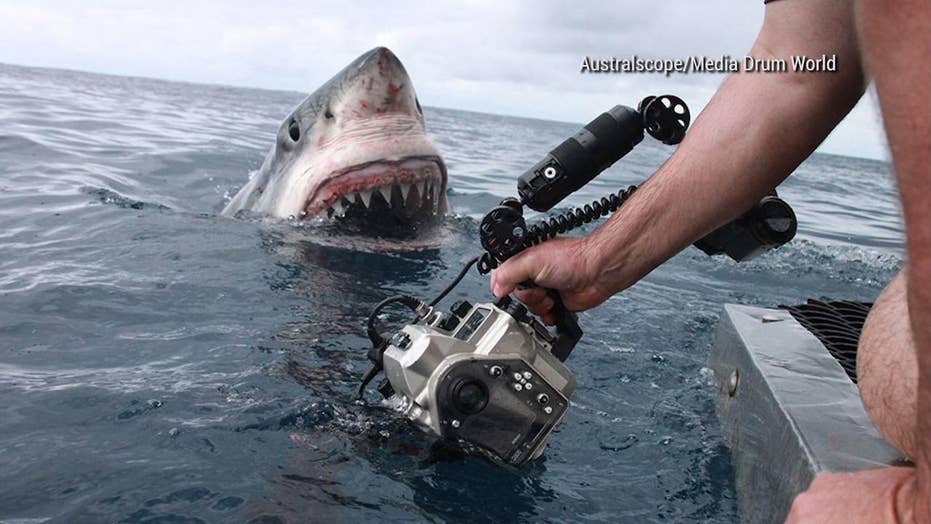 An Australian photographer has captured terrifying images of a great white shark that came within inches of his hand as he attempted to get the best shots.

Just when you thought it was safe to go back in the water.

An Australian photographer has captured terrifying images of a great white shark that came within inches of his hand as he attempted to get the best shots.

The remarkable images show the 16-foot great white lifting its head out of the water, bearing its dagger-like teeth and biting a metal cage in the water, news.com.au reports. Commercial diver Luke Thom, 26, who was able to capture photographer Andrew Fox getting the images, said it elicited a frightening reaction.

MEGALODON SHOCKER: HUGE KILLER SHARK MAY HAVE BEEN WIPED BY GREAT WHITES

“Holy s*** is probably the most common reaction," Thom said in comments obtained by the Australian news outlet. "I see a story and a moment in the photo. It’s not like watching a video. You can look at a photo and imagine what is going on."

So close he could taste him! STUNNING pictures have captured the moment a huge Great White shark came within inches of a photographer’s hand as he tried to get the best shot. (Credit: Australscope/Media Drum World)

The apex predator, which was said to weigh as much as 300 pounds, is also seen looking straight into the camera to decipher what Fox is doing with his fish-eye camera. Great white sharks weight approximately 4,000 pounds, while the largest one ever recorded weighed 5,000 pounds.

The encounter happened at Neptune Islands, off the coast of South Australia, an area known for its shark tourism.

The shark has a nibble on the steel cage. (Credit: Australscope/Media Drum World)

“These sharks are pretty incredible animals and they need protection and minimal human impact,” Thom said.

He spots the camera and comes in for a closer look. (Credit: Australscope/Media Drum World)