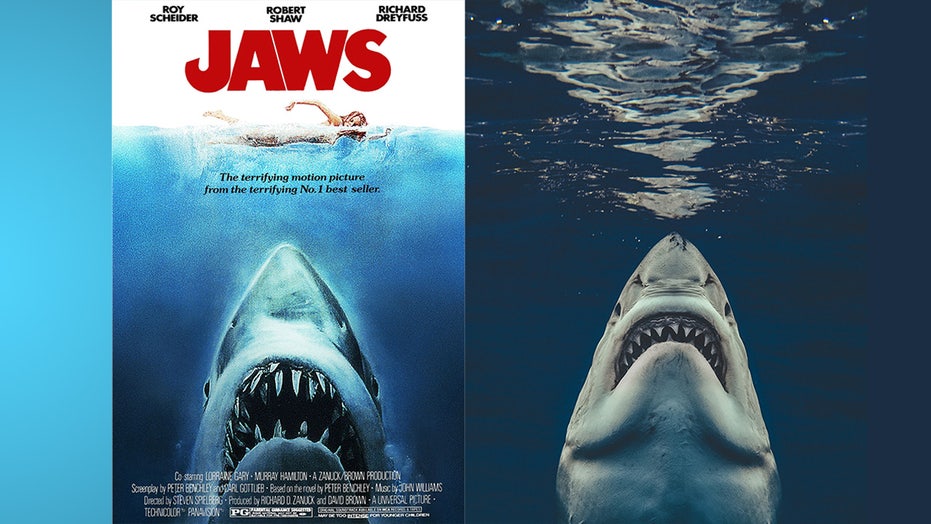 Get out of the water!

A terrifying image captured by a cage diver off the west coast of Mexico shows a gigantic great white shark heading for the water's surface — bearing a striking resemblance to the iconic movie poster for Steven Spielberg's 1975 blockbuster.

The 17-foot-long predator is seen with a large set of jagged teeth as it swims overhead in the image.

Euan Rannachan, 32, is the British photographer and filmmaker who snapped the picture from only a few feet away inside a cage, according to The Daily Mail.

The image above, courtesy of Euan Rannachan/ Magnus News, shows a massive great white shark heading for the water's surface off the coast of Mexico.

"The shark in my image is a female and her name is Squirrel. We'd been with her for a while. We have these people on the boat called shark wranglers and they throw these two-foot chunks of tuna to get the shark close to the surface," the photographer told the British news site.

Unlike in the movie, of course, there were no swimmers to be found in the water.

A picture taken by Euan Rannachan for Magnus News is seen at right. The famous poster for "Jaws" is seen at left.

'TRANSFORMATIVE CHANGES' ARE NEEDED TO SAVE NATURE AND OURSELVES, NEW CLIMATE REPORT CLAIMS

Rannachan explained that at times, the sharks get annoyed and dive down under the boat and the bait so they can zoom up and grab the tuna that's being used to lure the beast.

"That's exactly what Squirrel was doing here, she was fed up probably messing around on the surface and dived back down under the boat. It was really deep there but the water clarity was amazing," he told The Daily Mail.

The Spielberg thriller, which spawned sequels and inspired imitators, tells the story of Martin Brody, who hunts a huge shark off of Amity Island, where a young woman has been killed while skinny-dipping.