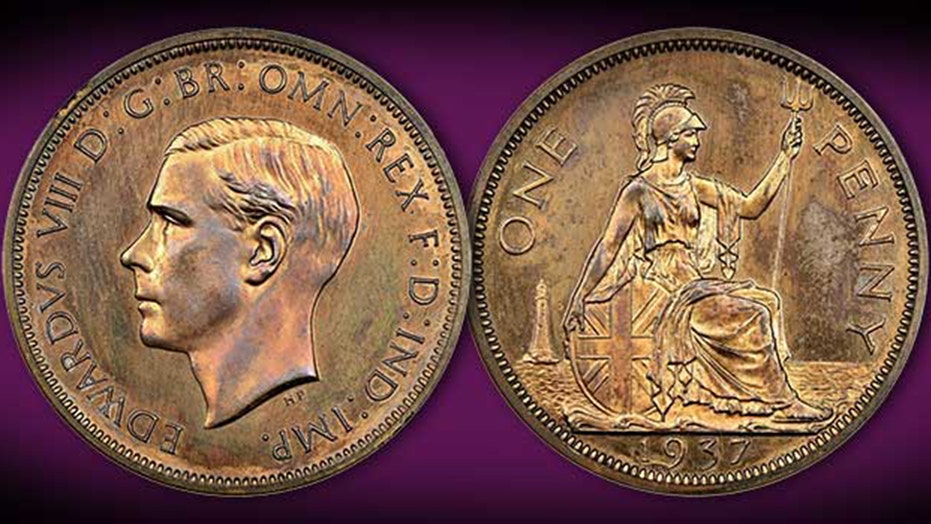 A rare copper coin minted to commemorate the reign of King Edward VIII, which lasted less than a year, has been sold at auction for a whopping $163,000 (133,000 pounds).

The 1937 Pattern Penny was created as a trial coin by the Royal Mint, according to The Sun. However, Edward VIII abdicated the throne in 1936 to marry American socialite Wallis Simpson, who had previously been married to U.S. naval officer Win Spencer.

As Edward VIII ended his reign abruptly, only a few coins were ever minted, making them highly collectible. The last time an Edward VIII 1937 Pattern Penny went up for auction was 1978.

"The abdication crisis of 1936 forever denied the mass production of coins bearing Edward VIII's likeness," auctioneer Gregory Edmund said in comments obtained by The Sun. "The handful of his attractive trial specimens produced in anticipation of the coronation are all that exist for those seeking to complete their coin collections."

Edmund added that it was "no surprise" that collectors from around the globe were interested in the rare coin, "particularly as its extreme rarity goes hand in hand with the very fact this coin represents such a tangible link to a defining historical event within living memory."

The Sun adds that the Edward VIII Pattern coins were added to the Royal Collection in June 1938. The rest are stored in a safe at the Royal Mint.

Last year, personal effects from Edward VIII and Simpson were sold at auction, including a Cartier pocket watch, an ornate gold pencil holder and a gold pocket magnifying glass engraved with the letter “E.”