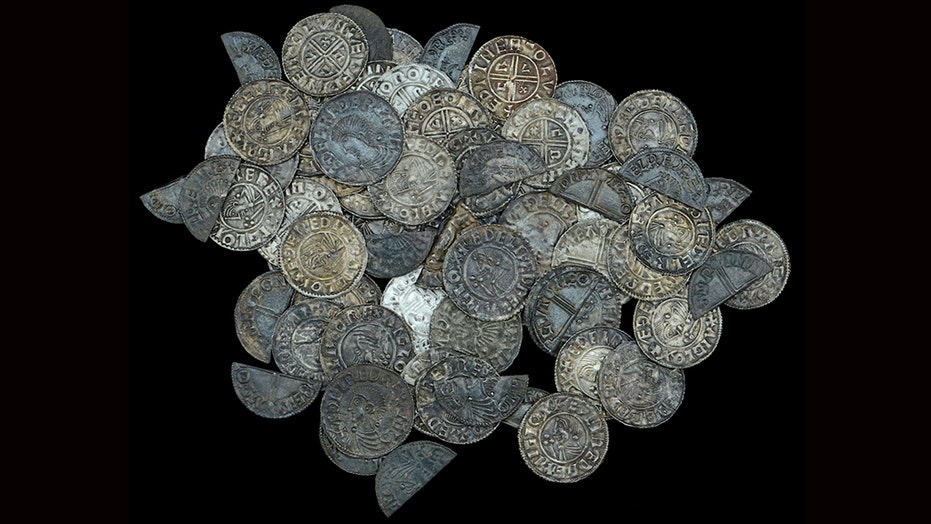 A metal detector enthusiast in England has stumbled upon a treasure trove of silver coins believed to be 1,000 years old and worth about $60,000.

Fifty-year-old Don Crawley, a native of Suffolk, found the 99 coins, which include pennies and half pennies, after making his first visit to a farmer's land.

"It was my first visit to this farmer’s land in Suffolk," Crawley said in a Dix Noonan Web auctions press release obtained by Fox News. "After walking up an incline in the field, my Deus detector gave off a strong signal and within a short space of time I had recovered over 93 coins."

He added that he found another six coins after the Finds Liason Officer was "called in" to investigate the site, which turned out to be an ancient Saxon church. Crawley said that he has been an amateur metal detector enthusiast for 30 years, but had never come upon a find like this.

There are 81 pennies and 18 cut half-pennies in total. DNW noted that there are two types of coins, a CRUX type and a Long Cross type, which the auction house said means they were buried between 997 and 1003 A.D.

"It is therefore possible this hoard could have been buried in AD 999 as penitence when the new millennium raised fears of a judgement day," DNW said in its release.

After Crawley collected the hoard, the coins were taken to the British Museum where they were identified as silver pennies from the reign of King Aethelred II, who reigned over the country from 978-1016.

'HOLY GRAIL' FOUND: RARE PENNY MIGHT BE WORTH $1.7M AFTER IT WAS FOUND IN BOY'S LUNCH MONEY

"Aethelred is renowned in history as the Unrede or 'unready' because of the weakness of his government," the statement adds. "Viking raids of increasing magnitude forced the King to pay tribute as Danegeld  to try to stop them attacking, but to no avail."

DNW’s Antiquities specialist Nigel Mills said in the release the hoard of coins comes from two mints, including "Melton Mowbray and a previously unrecorded mint."

"The coin reads 'Dreng mo Lude' which translates as Dreng moneyer in Louth, which is in Lincolnshire," Mills added.