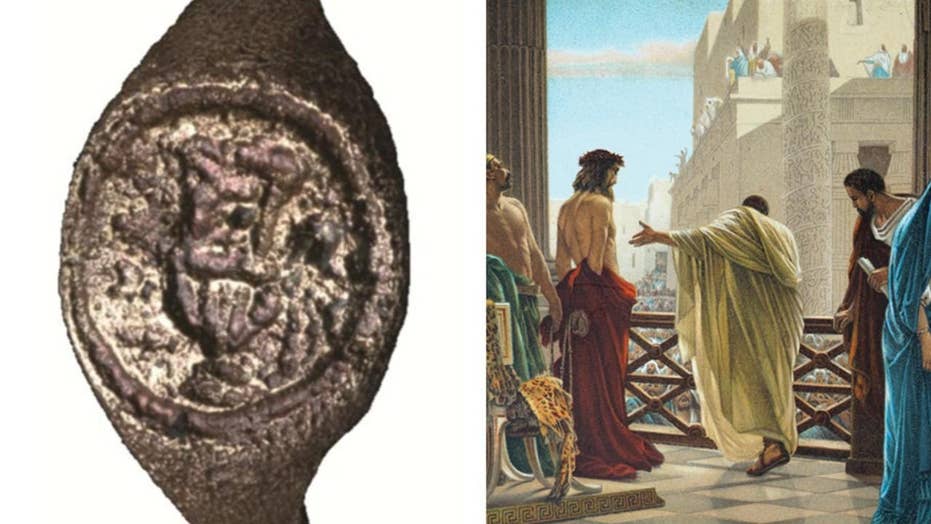 2,000-year-old ring discovered with the name of Pontius Pilate

A 2,000-year-old ring bearing the name Pontius Pilate was discovered in the West Bank. Pontius Pilate is known as the prefect who ordered the killing of Jesus Christ.

Experts in Israel have identified a ring that may have belonged to Pontius Pilate, the Roman governor who oversaw the trial and crucifixion of Jesus Christ.

Haaretz reports that the bronze ring was discovered 50 years ago during excavations at the Herodion fortress in the Judean desert.

Initially uncovered in a dig led by Professor Gideon Foerster of Hebrew University of Jerusalem, the ring was handed over to a team researchers currently working Herodion, led by Roi Porat, also of  Hebrew University. Intense cleaning and a specialist camera owned by the Israel Antiquities Authority have revealed the ring’s secrets.

A wine vessel and the Greek inscription “Pilatus” can be clearly seen on the ring, according to Haaretz.

As prefect of the Roman province of Judea, it is quite possible that the ring belonged to the infamous Pontius Pilate. Experts also speculate that it may have been used by a member of Pilate’s court to sign documents in the prefect’s name.

A photograph of the ring clearly shows the inscription of a ‘krater’ – a vessel used to water down wine.

The latest research on the ring is published in the Israel Exploration Journal.

The Herodion, the winter palace of the biblical King Herod, is located on a cone-like hill that still today juts out prominently in the barren landscape of the Judean Desert, near the West Bank city of Bethlehem.

Part of the imposing fortress and mausoleum was used by the Roman officials that governed ancient Judea, according to Haaretz, making a link with Pontius Pilate possible.

The ring is just the latest fascinating biblical-era discovery in Israel. In February, archaeologists announced the discovery of a clay seal mark that may bear the signature of the biblical Prophet Isaiah.

Aerial view from northwest of the Herodion palace-fortress. (Courtesy of G. Foerster)

The discovery of an ancient skeleton in northern Italy could also shed new light on brutal Roman crucifixions. There is relatively little archaeological evidence of crucifixions, the method used to execute Jesus Christ, according to Christian tradition.

View of the area where the ring bearing Pontius Pilate's name was found. (Courtesy of G. Foerster)

New analysis of a heel bone found in Gavello, near Venice, in 2007 may offer fresh insight into the brutal execution method, which was widely used in the Roman Empire.