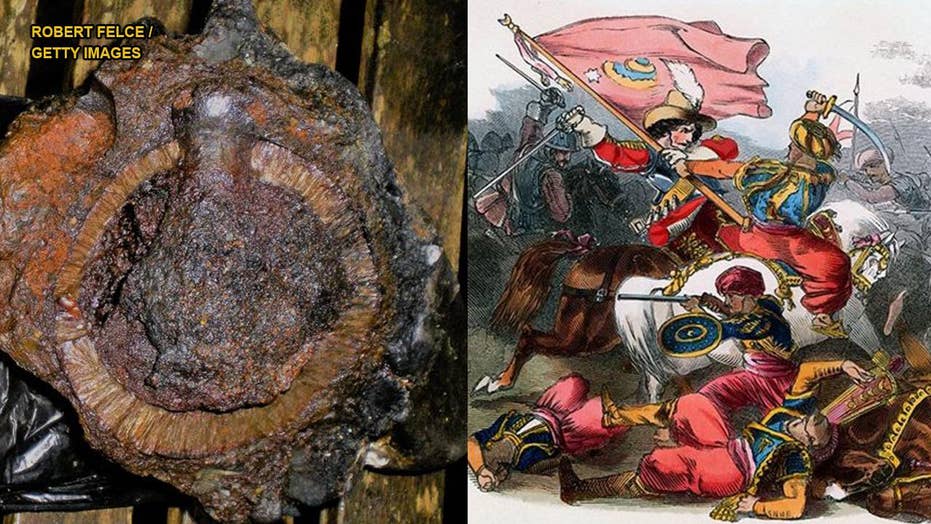 A gunpowder-filled hand grenade from the wreck of a former pirate ship has washed ashore on a remote U.K. beach. The heavily-encrusted grenades are from the wreck of the Schiedam, a former pirate ship that was being used to transport cargo by the Royal Navy. Local historian and author Robert Felce told Fox News that he found the hand grenade in late November at Dollar Cove on Cornwall’s Lizard Peninsula.

A gunpowder-filled hand grenade from the wreck of a former pirate ship has washed ashore on a remote U.K. beach.

Local historian and author Robert Felce told Fox News that he found the hand grenade in late November at Dollar Cove on Cornwall’s Lizard Peninsula. Felce also found a similar grenade at the same site on the Cornwall's southern coast in May 2017.

“I don’t use a metal detector – I use sight,” he explained. “I have become accustomed to what a lot of these things look like.”

The grenade packed with gunpowder. The artifact's metal casing can clearly be seen. (Robert Felce)

The ship ran aground in 1684 while transporting military material back to the U.K. from the Moroccan city of Tangiers.

“It was a time when Great Britain had interests in Tangiers,” said Felce, noting that the costly British garrison was evacuated from the city 1684. “They formed a flotilla, loaded up the flotilla and made a discreet departure,” he added.

After sailing through the Bay of Biscay, the flotilla ran into a storm that pushed the Schiedam off course. The ship eventually ran aground off the Lizard Peninsula.

“There were no fatalities on board, which was highly unusual,” Felce told Fox News. “The only fatalities were horses.”

“Because it was a government-owned ship by this time, they wanted to get as much of the cargo off, because it was ordnance,” he added. “They had to draw on companies [of soldiers] from [the neighboring county of] Devon. These people salvaged as much as they could.”

The wreck of the Schiedam remained undiscovered for centuries until it was spotted in 1971 by a diver in Gunwalloe Church Cove. The ill-fated ship continues to reveal its secrets, with the remains of some of the Schiedam’s cannon’s recently spotted on the seabed by divers.

The hand grenades found by Felce have broken away from the concretions that form when iron objects corrode in water, causing a reaction that forms sand and other nearby items into a dense layer around them.

Felce is confident that more fascinating artifacts from the wreck will appear on local beaches. “I am absolutely certain that there will be other items come ashore,” he said.

The most southerly point of the British mainland, the stunning Lizard Peninsula was once known as the “graveyard of ships” thanks to its treacherous coastline. The peninsula is home to multiple shipwrecks.

“There are still remains of other vessels out there,” said Felce.

Other Cornish shipwrecks have been garnering attention in recent years. Last year, for example, divers in the U.K. uncovered amazing artifacts from a treasure-laden ship that sank off the coast of Cornwall in the late 17th century. Described as one of Britain’s richest wrecks, the merchant ship President was carrying a cargo of diamonds and pearls from India when she sank during a storm in February 1684.