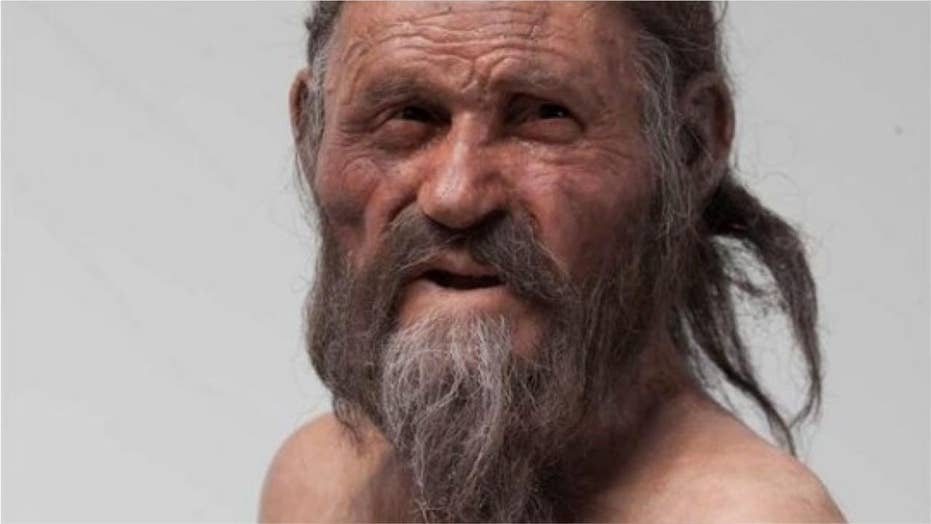 After more than 20 years of studying clues about Ötzi the Iceman, researchers say that frozen moss has shed new light on his final journey.

Since his discovery in the Northern Italian Alps nearly 20 years ago, researchers have learned a great deal about Ötzi the Iceman, including what he sounded like, his diet and his health. Now, a new study is giving new insight into his final journey.

The research, published in Plos One, looked at at least 75 species of brypophytes (mosses and liverworts) that were preserved with Ötzi and hold "important clues" to his last moments, as well as his surroundings.

Ötzi is believed to have died around 3,300 B.C. around the age of 45, which was considered old at that time.

Researchers say that only 30 percent of those brypophytes were local species, meaning the rest were either transported inside Ötzi's stomach or on his clothing or by "large herbivores such as the Alpine Ibex whose droppings ended up frozen alongside the Iceman," a statement accompanying the study said.

A new genetic analysis reveals that Otzi the Iceman is most closely related to modern-day Sardinians. (Reconstruction by Kennis © South Tyrol Museum of Archaeology, Foto Ochsenreiter)

WHAT OTZI THE ICEMAN ATE BEFORE HE WAS MURDERED

"About two-thirds of the species grow in the nival zone (above 3,000m [9,843 feet] above sea level) now while about one-third do not," the study's abstract states. "A large part of this third can be explained by the Iceman having both deliberately and inadvertently carried bryophytes during his last, fatal journey."

"They were recovered as mostly small scraps from the ice around him, from his clothes and gear, and even from his alimentary tract," the study's lead author, University of Glasgow professor Jim Dickson, said in the statement. "Those findings prompted the questions: Where did the fragments come from? How precisely did they get there? How do they help our understanding of the Iceman?”

Some of the foreign species are native to the Schnalstal valley, the abstract added, suggesting that Ötzi traveled in the valley before eventually reaching his final resting place, the glacier.

Dickson, who has been studying Ötzi since 1994, added that the "crucial" moss that was discovered is known as Flat Neckera, discovered on his clothing as well as microscopic pieces in his stomach.

"That discovery and other mosses of similar ecology from low to moderate altitude are as near proof as it is possible to get that the Iceman climbed from south to north up Schnalstal rather than ascending other adjacent valleys," he added.

Ötzi was shot in the back with an arrow, according to news.com.au. The arrow was not found until 2001 when an arrow tip was discovered by X-rays and a CAT scan, embedded in his left shoulder. It is believed he bled to death because the arrow likely hit a vital artery.

The famous iceman also had a wound on the back of his head and a recently healed cut on his right hand.

He stood approximately 5 feet 3 inches and has been preserved for 5,300 years. This means that Otzi is older than the Egyptian pyramids and Stonehenge, the South Tyrol Museum, where he has been on display since 1998, explains on its website.

The mummified body was initially discovered in 1991 by hikers trekking across the Alps. Along with his frozen body, other artifacts associated with him, including clothing and equipment, are on display at the museum.

Ötzi has shed new light on what life was like during the Copper Age, when he lived, despite the fact he still used stone tools. He also owned an "innovative and very valuable copper axe," the museum added.