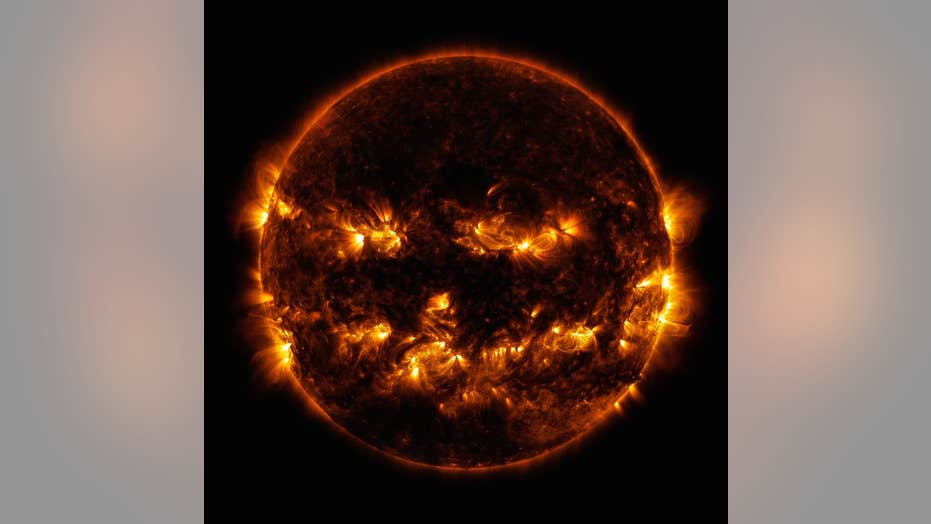 Just in time for Halloween, an image from NASA shows a very spooky sun.

In the remarkable image, the sun bears a striking resemblance to a jack-o'-lantern. In an email to Fox News, NASA compared the solar image to a "giant floating space pumpkin."

“Active regions on the sun combined to look something like a jack-o'-lantern’s face on Oct. 8, 2014,” explains NASA in a post on its website Thursday. “The active regions appear brighter because those are areas that emit more light and energy – markers of an intense and complex set of magnetic fields hovering in the sun’s atmosphere, the corona.”

The image of the "halloween" sun. (Image Credit: NASA/GSFC/SDO)

“This image blends together two sets of wavelengths at 171 and 193 angstroms, typically colorized in gold and yellow, to create a particularly Halloween-like appearance,” the space agency added.

The angstrom measurement is used for the wavelength of light. “This image is a blend of 171 and 193 angstrom light as captured by the Solar Dynamics Observatory,” NASA explained in the post.

Earlier this year, NASA released a stunning 61-minute time-lapse video that shows a decade in the life of the sun. The video was created from images taken by NASA’s Solar Dynamics Observatory.

The space agency released the time-lapse video to mark SDO’s 10th year in space. During its time in space, the SDO has also observed solar tornadoes, giant waves in plasma on the solar surface, polar coronal holes and magnetic explosions.

Earth’s star continues to reveal its secrets. NASA’s $1.5 billion Parker Solar Probe mission, which launched in 2018, has taken humanity closer to the sun than ever before and the spacecraft is helping scientists shed new light on the star.