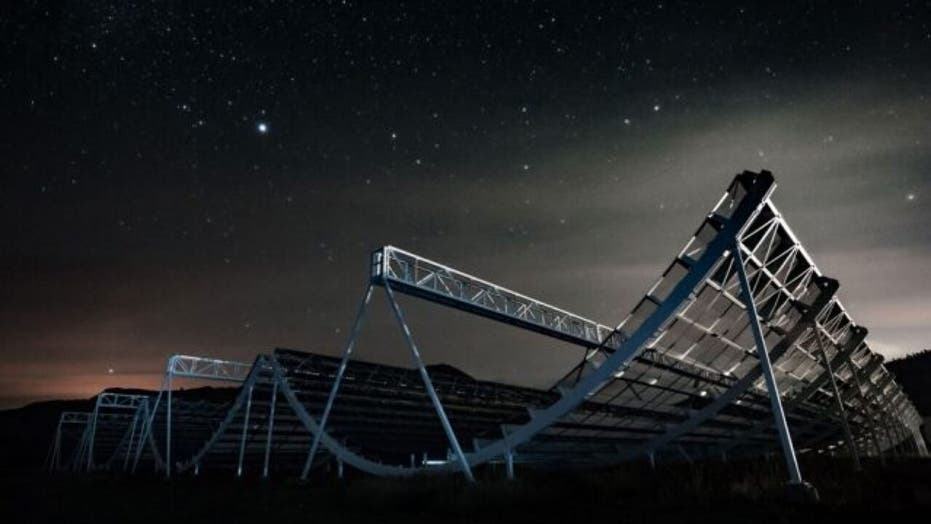 Repeating radio signals from outside our galaxy discovered

Astronomers have discovered mysterious repeating radio signals from outside of our galaxy.

Astronomers recently discovered a strange repeating rhythm of fast radio bursts coming from outside our galaxy.

The radio bursts come from 500 million light-years away, according to a statement released by MIT, which participated in the research. A light-year, which measures distance in space, equals about 6 trillion miles.

Details of the radio bursts emerged earlier this year. The research has now been published in the journal Nature.

“Fast radio bursts, or FRBs, are short, intense flashes of radio waves that are thought to be the product of small, distant, extremely dense objects, though exactly what those objects might be is a longstanding mystery in astrophysics,” the researchers explained in the statement. “FRBs typically last a few milliseconds, during which time they can outshine entire galaxies.”

The fast radio burst source has been cataloged as FRB 180916.J0158+65. Experts say that it is the first to produce a periodic, or cyclical, pattern of bursts. “The pattern begins with a noisy, four-day window, during which the source emits random bursts of radio waves, followed by a 12-day period of radio silence,” the researchers said.

The 16-day pattern appeared consistently over a 500-day period. "This FRB we're reporting now is like clockwork," said Kiyoshi Masui, assistant professor of physics in MIT's Kavli Institute for Astrophysics and Space Research, in the statement. "It's the most definitive pattern we've seen from one of these sources. And it's a big clue that we can use to start hunting down the physics of what's causing these bright flashes, which nobody really understands."

Usually, fast radio bursts are “one-offs,” according to experts, although in some cases they have come from the same source.

The Canadian Hydrogen Intensity Mapping Experiment (CHIME) radio telescope in British Columbia was the first to pick up the signals from FRB 180916.J0158+65. The telescope picked up 38 signals from the source between September 2018 and February 2020. Astronomers say that they traced the signal to a star-churning region on the outskirts of a massive spiral galaxy.

Spiral galaxies, like our Milky Way, have a central nucleus and “spiral arms” containing stars, gas and cosmic dust.

"These periodic bursts are something that we've never seen before, and it's a new phenomenon in astrophysics," said Masui in the statement.

In a paper published in the journal Nature, the scientists discuss the possible scenarios that created the radio bursts. “One possibility is that the periodic bursts may be coming from a single compact object, such as a neutron star, that is both spinning and wobbling — an astrophysical phenomenon known as precession,” they explained in the statement. “Another possibility involves a binary system, such as a neutron star orbiting another neutron star or black hole.”

A third scenario involves a radio-emitting star orbiting a central source. “If the star emits a wind or cloud of gas, then every time the source passes through the cloud, the gas from the cloud could periodically magnify the source's radio emissions,” the scientists explain.

One possibility is that the fast radio bursts come from magnetars — neutron stars that are thought to possess a powerful magnetic field.

In a separate project, scientists used the Lovell telescope in the U.K. to discover a fast radio burst from deep space that has a 157-day repeating pattern. FRB 121102 shows activity for 90 days and then goes silent for 67 days, according to a study that was recently published in the Monthly Notices of the Royal Astronomical Society.