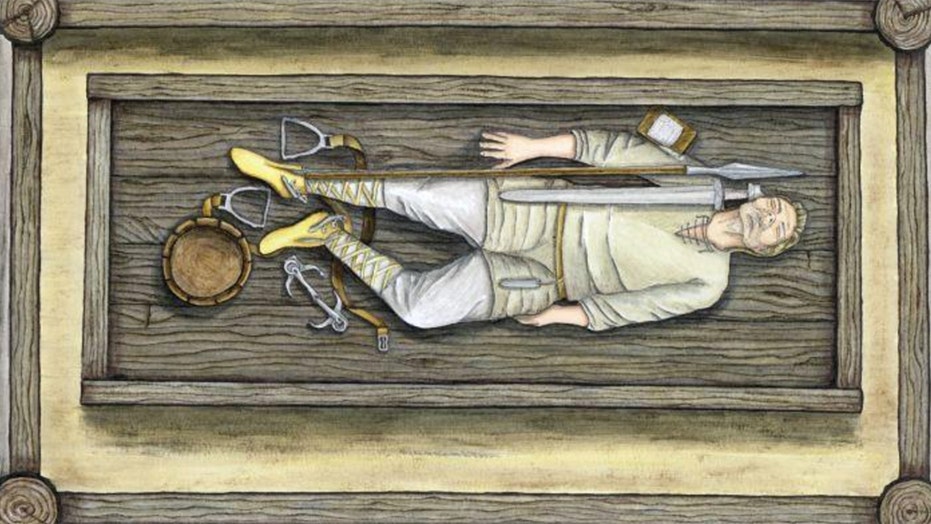 The four 11th-century graves were discovered in a cemetery in the village of Ciepłe in northern Poland, according to the Science in Poland website.

“In the central part of the cemetery there were four very richly equipped chamber graves,” said Dr. Sławomir Wadyl, of the Archaeological Museum in Gdańsk, to Science in Poland. “Men, probably warriors, were buried in them, as evidenced by the weapons and equestrian equipment deposited with the bodies.”

By analyzing the remains and the items the men were buried with, experts discovered that the warriors were from Scandinavia.

Artist's illustration of one of the graves. (K.Patalon/Science in Poland)

"The deceased buried in the central part of the cemetery represented the then social elites, as evidenced by the monumental structure of their graves and rich equipment. They probably belonged to a group of elite riders, but their role was probably not limited to the function of warriors,” Dr. Wadyl told Science in Poland.

The expert believes that the men may have collected taxes for the local Polish ruler, as evidenced by scales with sets of weights found in two of the graves.

Other medieval discoveries in Poland have been garnering attention recently. Experts, for example, recently found a shipwreck in the River Vistula that may date back to the medieval era.

The vessel, which is 121 feet long and almost 20 feet wide, was found in a stretch of the river north of Warsaw, according to the Science in Poland.

Viking-era discoveries have also been grabbing attention across the Baltic Sea in Scandinavia. A mysterious double Viking boat burial, for example, was recently discovered in Norway, intriguing experts.

In another project, a Swedish grave containing the skeleton of a Viking warrior, long thought to be male, was recently confirmed as female.