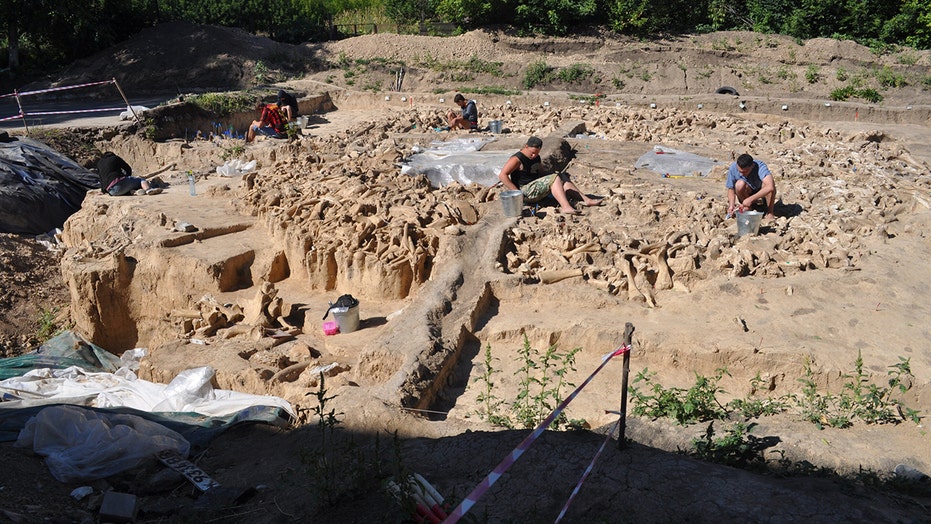 Researchers have discovered a mysterious structure at least 20,000-years-old comprised of woolly mammoth bones in Russia that has left experts stunned.

The study, published in the scientific journal Antiquity, notes that the structure — known as Kotenski 11 — was found in 2014 in Kotenski, Russia. Excavation, which started in 2015 and took three years, revealed that the fossilized bones came from 60 mammoths.

"Kostenki 11 represents a rare example of Palaeolithic hunter-gatherers living on in this harsh environment," the study's lead author, Alexander Pryor, said in a statement. "What might have brought ancient hunter gatherers to this site? One possibility is that the mammoths and humans could have come to the area on masse because it had a natural spring that would have provided unfrozen liquid water throughout the winter—rare in this period of extreme cold."

The majority of the bones found at the site investigated, in the Russian Plains, are from mammoths. A total of 51 lower jaws and 64 individual mammoth skulls were used to construct the walls of the 30ft by 30ft structure and scattered across its interior. Credit: Alex Pryor

In total, 51 lower jaws and 64 mammoth skulls were found in the site. The experts also found a number of reindeer, horse, bear, wolf, red fox and arctic fox bones.

This "mammoth house" is the latest discovered in Russia and is the oldest and largest, at 30 feet by 30 feet. There are approximately 70 of these structures that have been discovered in Ukraine and the west Russian Plain in the past.

"These finds shed new light on the purpose of these mysterious sites," Pryor added. "Archaeology is showing us more about how our ancestors survived in this desperately cold and hostile environment at the climax of the last ice age. Most other places at similar latitudes in Europe had been abandoned by this time, but these groups had managed to adapt to find food, shelter and water."

Experts previously believed these structures were used as housing. However, the new study notes that it may not be the case with Kostenki 11, and that it may have been a "long term base camp site." Researchers discovered charred wood and other plant remains. The wood, as well as the bones, were burned for fuel. The plants may have been used for food, as well poisons, medicines, string or fabric, according to the statement.

Mammoth remains have been found all over the globe in recent months. In June 2018, a mysterious mammoth bone was found on a beach in Loch Ryan in southwest Scotland.

Two months later, in August 2018, a frozen woolly mammoth was found in Siberia, with researchers theorizing that it may be a new type of species, because of its small stature. It has been dubbed a "Golden mammoth" and could be as much as 50,000 years old.

In 2018 archaeologists announced the discovery of a mammoth kill site in Austria, where Stone Age people slaughtered mammoths.

George Church, a Harvard and MIT geneticist and co-founder of CRISPR, is the head of the Harvard Woolly Mammoth Revival team, a project that is in attempting to introduce mammoth genes into the Asian elephant for conservation purposes.

"The elephants that lived in the past — and elephants possibly in the future — knocked down trees and allowed the cold air to hit the ground and keep the cold in the winter, and they helped the grass grow and reflect the sunlight in the summer," Church told Live Science in May 2018. "Those two [factors] combined could result in a huge cooling of the soil and a rich ecosystem."