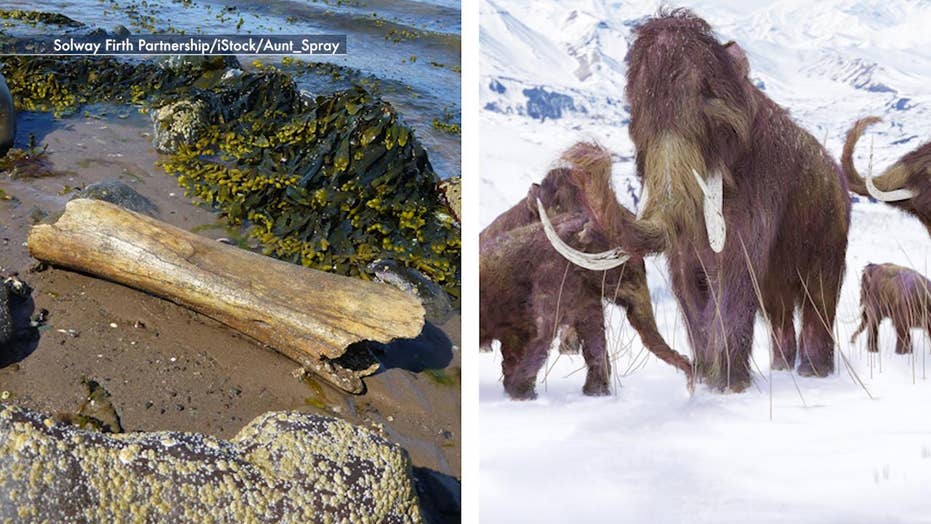 Woolly Mammoth: A look at a rare discovery at Loch Ryan beach

Long extinct cave lions may be about to rise from their icy graves and prowl once more alongside woolly mammoths and ancient horses in a real-life Jurassic Park.

In less than 10 years, it is hoped the fearsome big cats will be released from an underground lab as part of a remarkable plan to populate a remote spot in Russia with Ice Age animals cloned from preserved DNA.

Experiments are already underway to create the lions and also extinct ancient horses found in Yakutia, Siberia, seen as a prelude to restoring the mammoth.

An illustration of a family of Woolly Mammoths grazing on what is left of the grasses as winter approaches in this ice age scene. (Credit: iStock)

He said: “The prospect was no longer fantastical.

"Today, technology is developing at an explosive pace, and what yesterday seemed to be scientific nonsense, today is an absolutely clear prospect for scientists.”

Mr. Nikolaev claimed the remarkable return of the extinct beasts will be possible because of DNA material of the giants found in the permafrost in Yakutia, also called Sakha Republic.

He said: "We are actively working with South Korea.

“Thanks to cooperation with Korean and Japanese scientists, in my opinion, this [cloning a mammoth] will happen in the next decade."

In 2014 he first proposed “an Ice Age Park with mammoths” to act as home for them to roam, he said.

Further details of the incredible plans for the new “world class paleo-genetic scientific center” will be unveiled next month when Vladimir Putin hosts a major investment forum.

The cloning laboratories – some sunk deep in the permafrost soil –aim to extend research by Russian scientists who are already working closely with South Korean specialists hoping to restore extinct species.

Yakutsk is capital of diamond-rich Sakha Republic, also known as Yakutia, where 80 percent of finds of samples of Pleistocene and Holocene animals with preserved soft tissues have been made.

The scheme of the new center will be unveiled at the 4th Eastern Economic Forum hosted by Putin opening on Sept. 11 in Vladivostok.

It will “aim to study extinct animals from living cells — and to restore such creatures as the woolly mammoth, woolly rhinoceros, cave lion and breeds of long-gone horses”, reported The Siberian Times.

The cloning scientists are already using DNA from the ancient animals has been preserved in remains encased in frozen soil – or permafrost – for tens of thousands of years.

The center will be based at Russia’s Northern-Eastern Federal University (NEFU) which is seeking further investment for the extraordinary project.

Expert Dr. Lena Grigorieva – who drafted plans for the center –said: “There is no such unique material anywhere else in the world.”

But scientists would also explore ways of helping fight human diseases, she said.

“We study not only Pleistocene animals — another line is the study of the history of settlement of the North-East of Russia,” she said.

“Such studies will help in the study of rare genetic diseases, their diagnosis, prevention.”

There are also links between Russian scientists and trailblazing Harvard University geneticist Professor George Church who plans to inset woolly mammoth genes into an Asian elephant embryo by 2020.

Prof. Church has revealed to Sun Online how a cloning project was on the verge of being able to grow a baby mammoth in a lab.

His team of leading Harvard scientists have been using DNA recovered from a woolly mammoth found perfectly preserved in ice in Siberia after dying 42,000 years ago.

By merging genes from the mammals with that of elephants their species may be resurrected.

The team is set to publish in the coming weeks scientific papers laying out in detail their revolutionary technique in creating and implanting mammalian embryos.

Speaking to exclusively to Sun Online, Prof. Church said: “We have already revived dozens of genes and are testing them in elephant cells.

“We are focusing on a reviving mammoth genes and making a mammoth/elephant hybrid and help them spread to vast wild, arctic climates.”

Using a genetic engineering technique called CRISPR-Cas9 gene-editing, his team of scientists can “cut and paste” strands of DNA into elephant stem cells with a precision not seen before, paving the way for a woolly mammoth embryo.

Prof. Church said he wants to then grow a hybrid woolly mammoth/elephant hybrid within an artificial womb rather than using a female elephant as a surrogate mum.

It is estimated this will take at least 22 months.

The professor believes this will allow woolly mammoths herds to begin once more plodding about the arctic and while doing so save the world.

Along with other measures, it's hoped the woolly mammoths will create an environment which could stop Siberia's permafrost melting and then releasing billions of tons of greenhouse gases.

The doomsday scenario has been dubbed as the “methane bomb” because if it happened it would dramatically worsen climate change, melting the ice cap and flooding countries across the world.

And there is clear evidence that this is already happening.

Bubble like mounds have been popping up like a geological plague and some have already burst and spewed out toxic gas which damages the atmosphere.

But the worst of this ticking time bomb has yet to happen.

Much of the methane is still trapped underneath by the permafrost layer which is fast disappearing and threatens to release the gas at any moment.

An area where this is starting to happen is the Yamal Peninsula.

And if the huge furry mammoths/elephant hybrids were to be brought into being, Prof. Church said they could repopulate these freezing wastelands and help lock in the lethal fumes.

He said: “Cold-resistant elephants would flatten the insulating snow and supporting trees in winter and favor the highly heat reflective grass in summer.

“They would also help capture new carbon by enhancing the photosynthetic capacity of the vegetation.”

Should Prof. Church and his Harvard uni team successfully clone woolly mammoths they would be taken to an extraordinary Ice Age safari park currently being developed by Russian scientists.

Called the Pleistocene Park, the 20,000 hectare zone in the furthest stretches of remote Siberia has been created in a bid to recreate an Ice-Age ecosystem.

Experts believe grazing woolly mammoths would also compact the snow in the winter and grass in the summer all of which lowers the permafrost temperature.