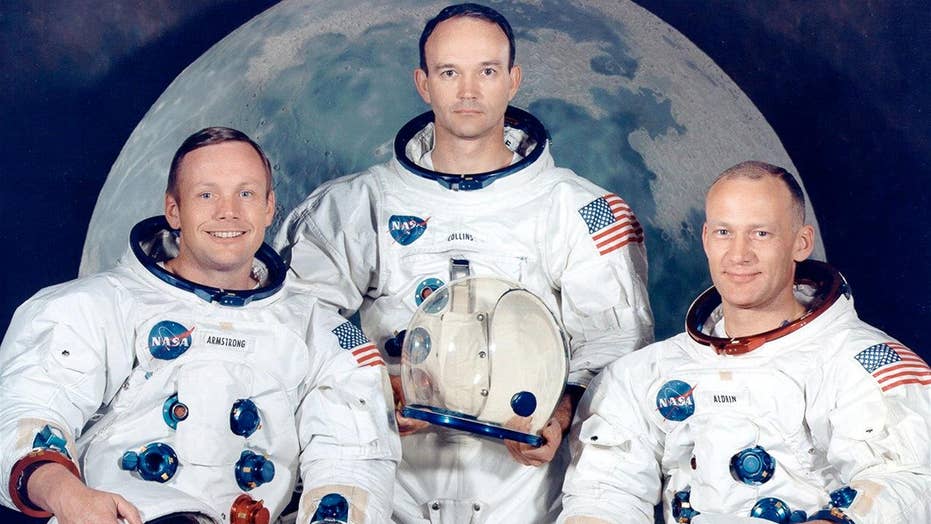 During a 2012 interview with Fox News Channel’s Neil Cavuto, astronaut Buzz Aldrin recalled the “magnificent desolation” he and Apollo 11 Commander Neil Armstrong witnessed when they landed on the Moon 50 years ago.

“You can see the horizon curving away.  Because of the sun-- you can't see the stars. It-- closes up-- the iris,” Aldrin recalled during the interview for a documentary entitled, “Fly Me to the Moon.”

“And you think, ‘This place, what I'm looking at, hasn't changed in hundreds of thousands of years,’” he said. “And now, Neil [Armstrong] and I are looking at this magnificent desolation.”

APOLLO 11 ASTRONAUT MICHAEL COLLINS RECALLS EPIC LAUNCH: 'WE FELT THE WEIGHT OF THE WORLD ON OUR SHOULDERS'

He also spoke about the awesome responsibility bestowed upon him and his crewmates.

This July 20, 1969 photo made available by NASA shows pilot Edwin "Buzz" Aldrin in the Apollo 11 Lunar Module. For the 50th anniversary of the landing, Omega issued a limited edition Speedmaster watch, a tribute to the one that Aldrin wore to the moon. (Neil Armstrong/NASA via AP)

“I prefaced desolate with magnificent, because of humanity's reaching outward and accomplishing something that people thought was impossible,” Aldrin said. “They dreamed of somehow reaching the moon.  And to demonstrate, to be a part of demonstrating this miracle was magnificent.”

On July 16, 1969, Aldrin, along with mission commander Neil Armstrong and command module pilot Michael Collins, launched from Kennedy Space Center atop a Saturn V rocket. Four days later, Armstrong made history when he became the first person to walk on the Moon. Aldrin exited the lunar module 19 minutes after Armstrong. The famed astronaut joked about being second during his interview.


“I will forever, no matter what I do, be known as the second man on the moon,” he quipped.

“Why does it bother you to be a second man to walk on the moon?  You're one of a dozen men who had that incredible role,” Cavuto asked in a follow-up question.

“I prefaced desolate with magnificent, because of humanity's reaching outward and accomplishing something that people thought was impossible.”

“Well, people love being vice president, don't they? No,” Aldrin responded with a chuckle.

APOLLO 11'S EPIC MISSION TO THE MOON IN PICTURES

“Does it bother me?  Yeah, it does a little bit,” Aldrin continued. “Why?  Because that isn't the way I would have described what this country did with two human beings landing on the moon and then deciding who was going to go out. We did things together as a team.”

The famous astronaut also recalls his famous steps across the surface of the moon and how he was well aware that the world was watching.

“Right near the end of our period out there … Neil was doing something with the rock boxes-- I knew where the TV camera was, and I jumped up and down and pranced around to demonstrate the mobility that a person has,” he said. “So I was demonstrating for the people watching on TV…intentionally showing them the varieties of kangaroo hop … of turning.”

During his sit-down with Cavuto, Aldrin also recollected the experience of looking back at Earth while on the surface of the Moon.

Aldrin also talked about the political significance of their mission to the moon, coming as it did during the space race with Russia at the height of the Cold War.

APOLLO 11: 'THE BOOK THAT LANDED MAN ON THE MOON' COULD SELL FOR $9 MILLION

“I do a lot of thinking today-- about somebody who had-- the guts to see that we were being outshone-- outshined in the Cold War by the Soviet Union, and to say, ‘What can we do'?" Aldrin said of President John F. Kennedy and his resolve to make the U.S. the first nation to reach the surface of the Moon.

The interview took place after NASA had shut down their Space Shuttle program in 2011 and Aldrin emphasized the need for the U.S. to get back into space and chart new territory.

Buzz Aldrin, on the left, practices scooping up a sample while Neil Armstrong, on the right, photographs the collection, during a practice session held before the Apollo 11 mission. (NASA Johnson)

“I believe that this nation should commit itself within two decades to landing an American permanently on another planet in the solar system,” he said.