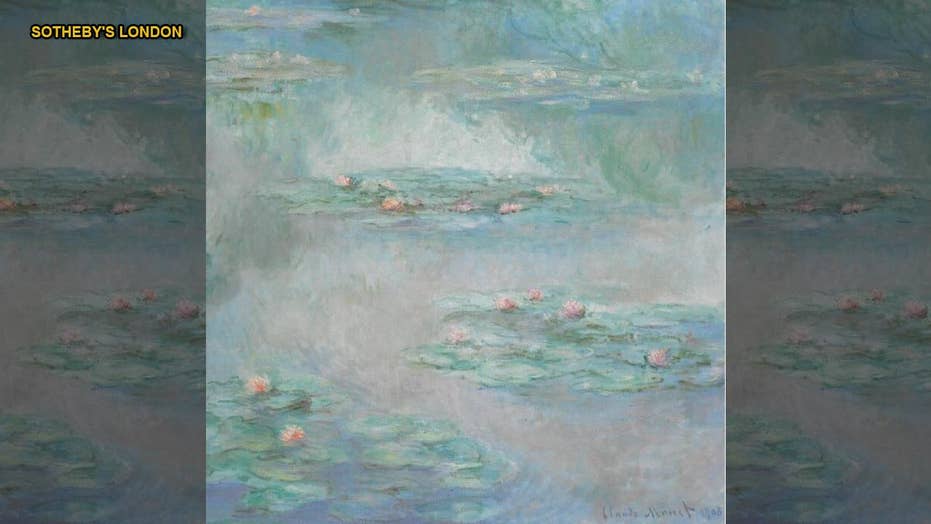 Monet painting not seen for 87 years expected to fetch $44.6 million at auction

French Impressionist Claude Monet's masterpieces are no strangers to record-breaking bids when they go up for auction. Now a beautiful painting of waterlilies, part of Monet's 'Nymphéas' collection, which has been in a private collection for 87 years, is expected to fetch up to $44.6 million when it hits the auction block next week. This comes one week after his 'Meules' painting sold for $110.7 million at Sotheby's New York.

One month after Claude Monet's "Meules" sold for a whopping $110.7 million at Sotheby's New York, a beautiful painting of waterlilies that's been in a private collection for 87 years is set for auction.

Part of Monet's "Nymphéas" collection, the painting is expected to fetch up to $44.6 million next week when it goes on auction in London for the first time ever.

The Impressionist's masterpieces have garnered record-breaking bids. His "Meules" raked in more than twice the high end of the estimate at Sotheby's in New York last month, according to Forbes.

"Monet’s Nymphéas are among the most iconic and celebrated Impressionist paintings and their profound impact on the evolution of Modern Art marks them as Monet’s greatest achievement. The artist’s famous lily pond in his garden at Giverny provided the subject matter for most of his major later works, paintings whose significance in forging the path for subsequent artists is now fully recognized," the Sotheby's catalog copy states.

"The theme of waterlilies, that became Monet’s most celebrated series of paintings, recorded the changes in his style and his constant pictorial innovations. The present painting, which dates from 1908, is a powerful testament to Monet’s enduring vision and creativity in his mature years," according to the famous auction house.

“This beautifully lyrical and softly ephemeral Nymphéas painted in 1908 is a timeless reflection of Monet’s vision and innovation,” Thomas Boyd-Bowman, head of Sotheby’s Impressionist and Modern Art Evening Sales in London, told Forbes. “Acquired in 1932, it has remained a hidden treasure in the same family collection for decades and will now make its very first appearance at auction.”