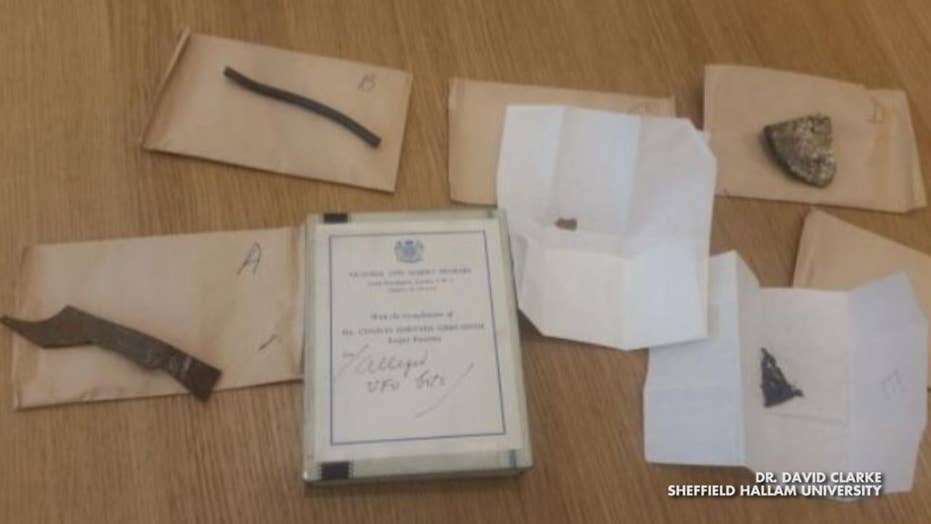 Was it a hoax? What are scientists saying about the long-lost wreckage of a purported ‘miniature UFO’ discovered at a London museum?

The long-lost wreckage of a purported ‘miniature UFO’ has been discovered at a U.K. museum.

Fragments from the supposed ‘UFO’ that was found in 1957 in a remote part of Northern England had been missing for decades, but have turned up in the archives of the Science Museum in London.

The ‘flying saucer’ was discovered on Silpho Moor, an area of open land in North Yorkshire, in an incident described as “Britain’s Roswell.” After analyzing the object, however, scientists said that the ‘UFO’ was likely part of an elaborate hoax.

WHAT IS THE BEST DAY TO SPOT A UFO?

David Clarke, a principal research fellow at the U.K’s Sheffield Hallam University, told Fox News that he found out about the artifacts after delivering a presentation at the Science Museum late last year.

“At first I thought it must be a joke, or the pieces of metal would be worthless,” he explained, via email. “They were stored off-site, so I arranged for the files to be sent to London for examination early in the New Year.”

Clarke, an expert in the study of contemporary legends, said that the fragments were stored in a plastic box along with files compiled by a former press officer at the Museum.

“Inside the files was a large tin cigarette box with a label marked ‘Victoria and Albert Museum – alleged UFO bits’,” he said. “When the box was opened we saw a collection of five paper envelopes (labelled A-E) that contains pieces of metal, fused metal/plastic amalgam and tiny pieces of copper foil. When I examined the associated correspondence I immediately noted references to pieces of ‘The Silpho Moor Object,’ with a note saying these pieces were forwarded to the museum for scientific examination in 1963.”

'STUNNING' TIC TAC SHAPED UFO ENCOUNTER BY US NAVY PILOT? 'IT WAS NOT FROM THIS WORLD'

The object was ‘discovered’ on Silpho Moor by three men who later paid £10 ($13.89) to another party who had removed it from the Moor, Clarke told Fox News. A section of the upper part of the ‘UFO’ was subsequently removed and the object was split in two. The central section was then extracted from the object, revealing a roll of copper wire that held a copper book.

Clarke explained that the book contained 17 tiny copper foil pages marked with hieroglyphic-type lettering, which corresponded with letters etched onto the copper base of the main object.

An image of the purported 'miniature UFO' that appeared in the Yorkshire Post newspaper (Dr. David Clarke/Sheffield Hallam University)

However, analysis by scientists at Manchester University and, later, in London, concluded that the ‘UFO’ was likely part of a hoax.

“Mystery remains as to who was responsible and why they went to such elaborate lengths to produce this artefact,” Clarke told Fox News. “From my point of view the interest lies not in the object itself but the stories and elaborate conspiracy theories that have grown up around it.”

The Science Museum declined to comment on this story when contacted by Fox News.