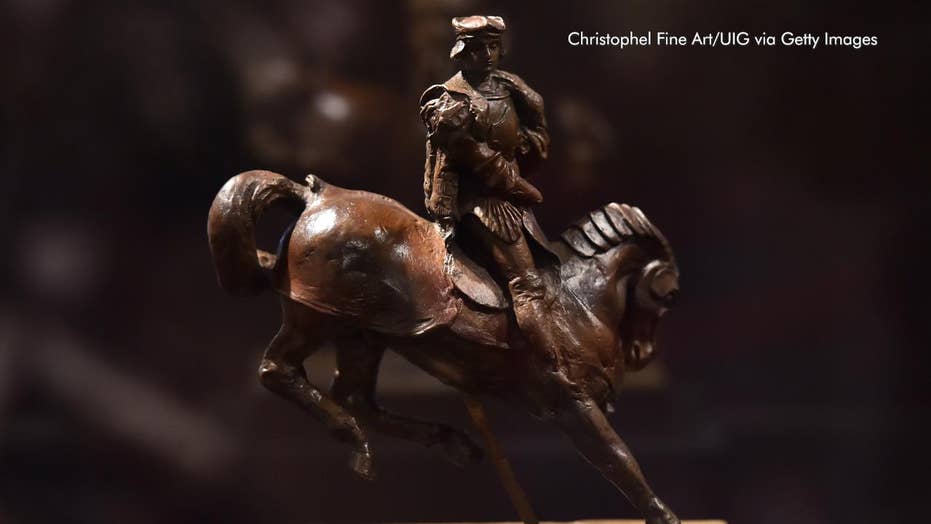 May 2, 2019 marks the 500th anniversary of Leonardo da Vinci’s death, and a statue based on a rare model made by the great artist and inventor is in the spotlight.

May 2, 2019 marks the 500th anniversary of Leonardo da Vinci’s death and a sculpture based on an extremely rare model made by the great artist and inventor is in the spotlight.

Cast in 2012 from a beeswax model made by da Vinci around 1510, the bronze “Horse and Rider” is garnering plenty of attention. The bronze statue and the original mold from the wax figure will be sold at auction in the fall.

“Of all the artists that have ever lived, one name stands above the rest and I don’t think anybody would argue against that,” Arlan Ettinger, president of Guernsey’s auction house told Fox News. “The man was a visionary, an inventor, a thinker the likes of which I don’t think has ever been duplicated.”

File photo - The sculpture "Horse and Rider" by Italian artist Leonardo da Vinci is pictured during a press preview of the exhibition "Leonardo the sculptor: Horse and Rider" at the Palazzo delle Stelline (French Institut) in Milan on Nov. 24, 2016.  (GIUSEPPE CACACE/AFP/Getty Images)

The beeswax model was never intended to be a small sculptural work, according to Ettinger. Instead, it was a study for a monumental sculpture of Charles d’Amboise, the French governor of Milan and da Vinci’s patron. The statue, however, was never built, leaving the wax model to provide a fascinating glimpse into the unfinished project.

The model was authenticated as having been the work of da Vinci in 1995 and was used to create the 28 cm (11-inch) bronze 17 years later.

Ettinger did not disclose a pre-sale estimate for the bronze, but da Vinci’s work typically commands a sizable sum.

“So few of Leonardo’s works are known to exist,” Ettinger added.

In 2017, da Vinci’s “Salvator Mundi” painting sold for a record $450.3 million at Christie’s auction house in New York. The highest known sale price for any artwork had been $300 million for Willem de Kooning's painting "Interchange."

"Salvator Mundi," Latin for "Savior of the World,” is one of fewer than 20 paintings by Da Vinci that are known to exist.

Da Vinci’s thumbprint was recently discovered in a drawing by the Renaissance Master that is owned by Queen Elizabeth II. The hidden detail is revealed in the new book “Leonard da Vinci: A Closer Look,” which analyzes 80 of Leonardo’s drawings from the Royal Collection and sheds new light on the famous artist’s craft.

The thumbprint was found on “The cardiovascular system and principal organs of a woman,” an anatomical drawing by Leonardo that dates to around 1509 and 1510.

A recent study also indicates that da Vinci, who was famously left-handed, was ambidextrous.