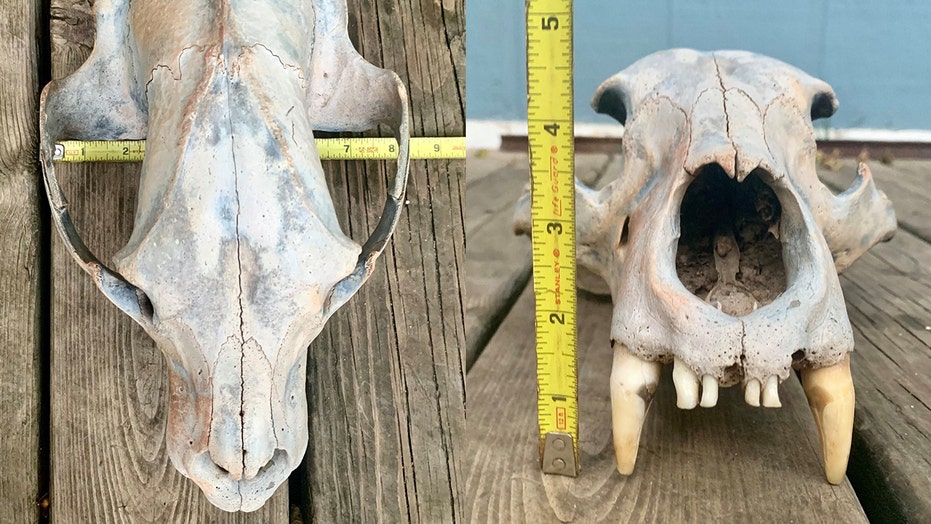 A pair of sisters from Kansas made a “grizzly” discovery when they found what experts have called an “ancient” bear skull that was buried along a river.

Ashley and Erin Watt were on a kayaking trip, heading down the Arkansas River in August, when they noticed a massive skull buried nose down in a sandbar, the Kansas Department of Wildlife, Parks and Tourism said Tuesday in a news release.

The curious sisters then pulled the exciting discovery out of the sand, only to find a uniquely shaped skull with a set of sharp carnivorous teeth. It was later determined the skull measured 16 inches long by 8.5 inches wide, the agency added.

Experts believed the skull was preserved in the sands of the Arkansas River and displaced by this year’s historic flooding in the region. (Kansas Department of Wildlife, Parks and Tourism)

The scientists verified that the sisters had found a bear skull that may be over 200 years old, Ashley wrote on Facebook.

However, its fossilized appearance left the experts questioning whether it belonged to a modern grizzly or a more primitive species.

“The bear skull was washed out of the same river sediments that routinely produce the skulls and bones of the American bison, some of which could date back as far as the last Ice Age,” said Everhart, the Adjunct Curator of Paleontology at the museum.

“Whether it is hundreds or thousands of years old, the skull gives us a better insight into the richness of life on the plains before Western man," he said.

The bear skull was in “excellent” condition except for the loss of a few minor teeth, the agency said. (Kansas Department of Wildlife, Parks and Tourism)

Grizzly bears were native to Kansas and believed to have roamed throughout the state until they were all hunted and killed in the mid-1800s, the agency said. While there have been historical accounts of grizzly bears in Kansas, the agency said the skull could mark the first piece of physical evidence of their former presence, pending species verification.

Everhardt said the skull was one of three of its type to have been found in Kansas, the last of which was discovered in the 1950s, Ashley wrote on Facebook.

The sisters have donated the skull to the Sternberg Museum.