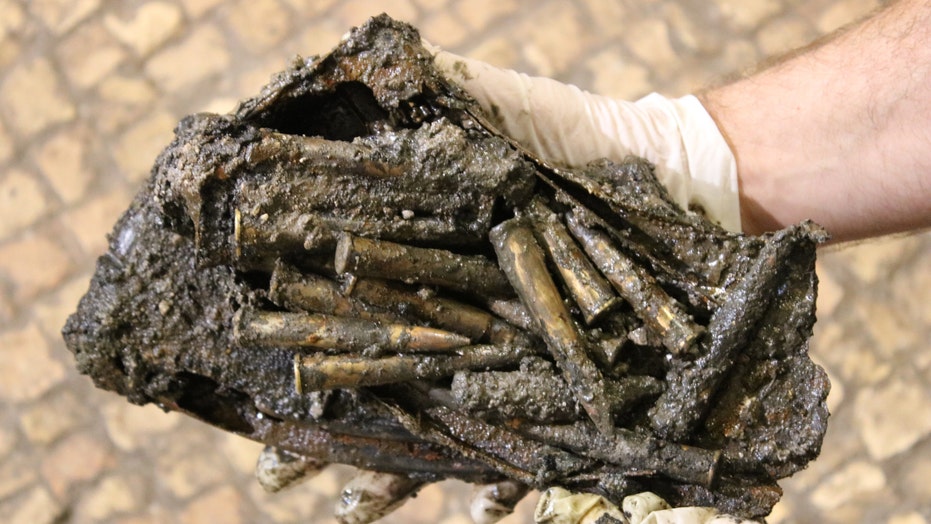 A stash of ammunition used by Jordanian forces during the Six-Day War in 1967 has been discovered near Jerusalem’s Western Wall.

Archaeologists were excavating beneath the entrance lobby of the Western Wall tunnels Wednesday when they found machine gun magazines full of bullets, bayonets and rifle parts, according to the Israel Antiquities Authority. The ammunition stash was found hidden in a cistern dating back to the period of the British Mandate in Palestine, which ended in 1948. The finds were examined by Israeli police bomb disposal experts.

In a statement emailed to Fox News, Dr. Barak Monnickendam-Givon and Tehila Sadiel, who are directing the excavation, said that 10 full magazines for Bren light machine guns were found, along with two bayonets for British Lee Enfield rifles.

“Usually, in excavations, we find ancient findings from one or two thousand years ago, but this time, we got a glimpse of the events that occurred 53 years ago, frozen in time in this water cistern,” they said. “Apparently, this is an ammunition dump that was purposely hidden by soldiers of the Royal Jordanian Army during the Six-Day War, perhaps when the IDF [Israel Defense Forces] liberated the Old City.”

The ammunition matches two Bren light machine guns that were found about a year and a half ago in another water cistern in the Western Wall plaza, according to Peretz.

Other discoveries have also been made as part of the excavation project. Archaeologists recently discovered hidden underground chambers dating back 2,000 years near the Western Wall.

Experts revealed the subterranean system near the Western Wall plaza and its tunnels. Excavations were conducted by the Israel Antiquities Authority in the “Beit Straus” complex beneath the entrance lobby to the Western Wall tunnels.

The Jordanian ammunition is from the 1967 Six-Day War. (Credit-Yoli Schwartz, Israel Antiquities Authority)

The subterranean system consists of a courtyard and two rooms arranged in three levels, one above the other. They are connected by staircases hewn from rock.