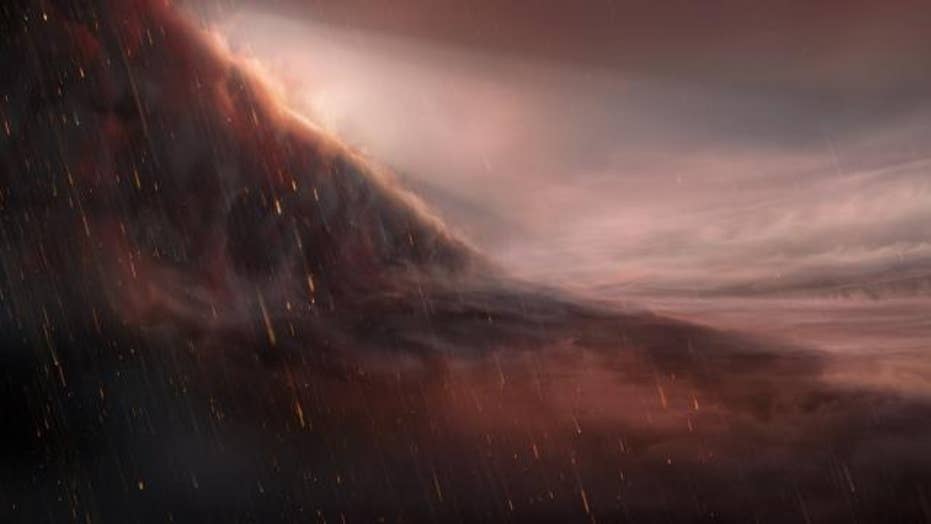 An international team of astronomers has discovered an exoplanet where it “rains iron.”

In a statement, Spain’s Institute of Astrophysics of the Canary Islands (IAC) explained that exoplanet WASP-76b has days when its temperatures exceed 2,400 degrees Celsius (4,352 degrees Fahrenheit), which is hot enough to evaporate metals. “Its nights, with strong winds, cool down the iron vapor so that it condenses into drops of iron,” scientists said in the release.

The exoplanet is located 390 light-years away, toward the constellation Pisces. A light-year, which measures distance in space, equals about 6 trillion miles.

The remarkable conditions on WASP-76b were discovered using the Echelle Spectrograph for Rocky Exoplanets and Stable Spectroscopic Observations (ESPRESSO). The high-resolution instrument, which is co-directed by the IAC, is installed on the European Southern Observatory’s Very Large Telescope (VLT) in Chile.

Artist's impression of the atmosphere on WASP-76b . (ESO/M. Kornmesser)

The research paper was published in the scientific journal Nature.

Scientists used ESPRESSO to identify chemical variations between night and day on WASP-76b, noting that it was the first time that such variations had been detected in a giant “ultra-hot” planet. "However, surprisingly, we do not see this iron vapor at dawn,” said David Ehrenreich, a researcher at the University of Geneva and the paper’s first author, in the statement. “The only explanation possible for this phenomenon is that it rains iron on the dark side of this exoplanet with extreme conditions.”

Similar to Earth’s moon, WASP-76b is “tidally locked,” which means that it keeps its same face toward the object that it orbits.

"Just like the Moon around the Earth, this planet always keeps the same face towards its star as it rotates around it, which causes this extreme difference in temperature between day and night on the planet," said Jonay I. González Hernández, a researcher at the IAC and part of the ESPRESSO science team, in the statement.

"Ultrahot giant planets are the best laboratories we have for studying extreme climates on exoplanets,” added Núria Casasayas Barris, a researcher at the IAC and doctoral student at Spain’s University of La Laguna, in the statement. “If we observe an exoplanet during its transit across the disc of its star we can study the part of its atmosphere through which the light from the star passes. With ESPRESSO it has been possible to detect chemical variations using analysis of the small part of the atmosphere we can observe.”

In a separate project, astronomers, after a 40-year search, recently spotted a first-of-its-kind star that pulsates on just one side.

Correction: An earlier version of this story incorrectly stated that the exoplanet is located 360 million light-years away.