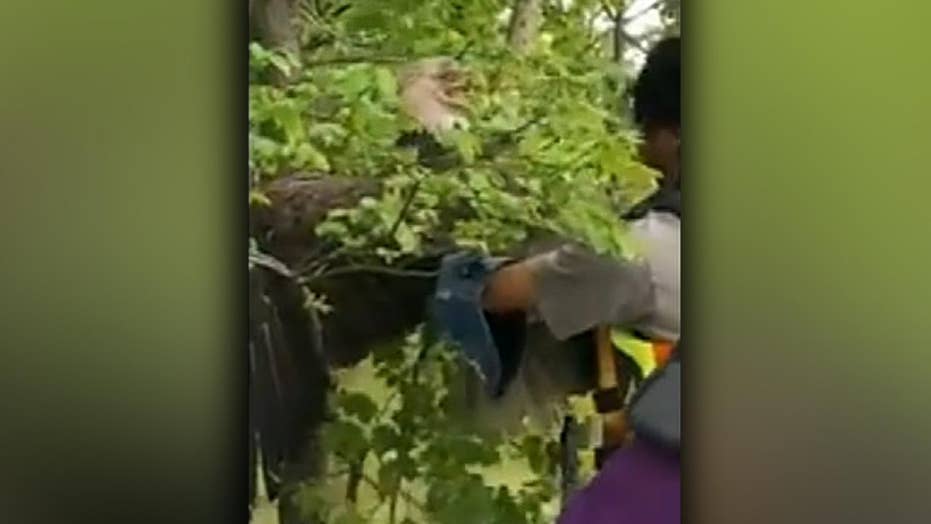 Raw video: Rehab team with the World Bird Sanctuary rescues an injured bald eagle trapped in a flooded area of Portage Des Sioux, Missouri after receiving a tip from a passerby.

A remarkable video shows an injured bald eagle being rescued from Missouri floodwaters.

Fox 2 News St. Louis reports that the eagle became trapped in a flooded area at Portage Des Sioux, Mo., but was spotted by a passerby.

“Yesterday our rehab team responded to a call about a bald eagle trapped in a flooding area who didn’t appear to be able to fly,” wrote World Bird Sanctuary in a Facebook post on May 7. “A huge thank you to Zac Beck who both spotted the eagle and who used his boat to get our crew right up to it. The eagle had been seen for some time in a clump of trees that was slowly flooding. Rising water allowed us to get right up to the trees and safely rescue the bird from its low perch, now only a couple feet above the water.”

The bird, however, was in critical condition. “Dehydrated, emaciated, cold, weak, and covered in old puncture wounds, this bird is not yet done with his ordeal,” explained World Bird Sanctuary, in its Facebook post. “Our medical staff speculate that he likely lost a fight with another eagle and then had too much soft tissue damage to be able to fly.”

Nonetheless, most of the eagle’s puncture wounds have now healed. “He is currently getting the best possible care in our rehabilitation hospital with our team working hard to rehydrate him and get his digestive system working again,” the Sanctuary added.

Other bald eagles have been garnering attention lately. A trio of bald eagles has been successfully raising eaglets in the backwaters of the Upper Mississippi River in Illinois.

The trio, which consists of two males (named Valor 1 and Valor II) and one female (Starr) live on the Upper Mississippi River National Wildlife and Fish Refuge.

Bald eagles were removed from the federal list of endangered and threatened species in 2007. The iconic birds are now flourishing across America, according to the U.S. Fish and Wildlife Service.