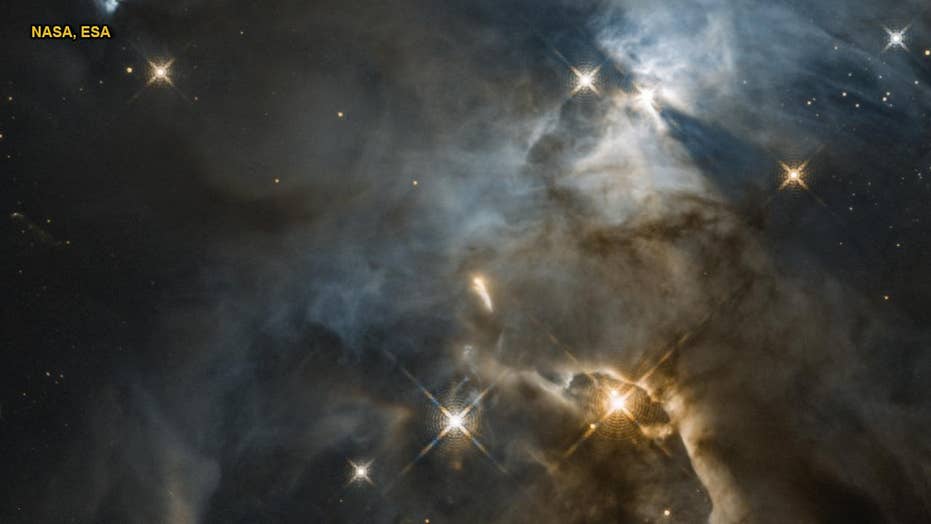 The Hubble Space Telescope has spotted what officials from NASA and the European Space Agency have dubbed 'a cosmic Bat Shadow' in a distant gas cloud, the Serpens Nebula.

This is no joke(r) – the Bat signal has been found in space.

The Hubble Space Telescope has spotted what officials from NASA and the European Space Agency have dubbed "a cosmic Bat Shadow" in a distant gas cloud, the Serpens Nebula.

At a distance of 1,300-light-years, the Serpens Neblua is further away from Earth than Gotham is from Metropolis, but the shadow that stretches from the star known as HBC 672 has two deep, dark (but not brooding) streaks emerging from it, lighting up the surrounding nebula.

"By clinging tightly to the star the disc creates an imposing shadow, much larger than the disc — approximately 200 times the diameter of our own Solar System," the ESA wrote on its website, announcing the find. "The disc’s shadow is similar to that produced by a cylindrical lamp shade. Light escapes from the top and bottom of the shade, but along its circumference, dark cones of shadow form."

The streaks that emerge from HBC 672 are likely due to the fact that the surrounding stars could "be in the process of forming planets in a protoplanetary disc," officials added in the release.

The shadow is as black as the dark night, but there are some color differences near the edges, where the light gets through (the Batmobile perhaps?). "Using the shape and color of the shadow, they can determine the size and composition of dust grains in the disc," officials added in the release.

While the shadow has garnered significant attention because of its obvious similarity to the Bat signal, shadows around young stars are quite common, officials said. It is just the angle that makes it interesting.

"The whole Serpens Nebula, of which this image shows only a tiny part, could host more of these shadow projections. The nebula envelops hundreds of young stars, many of which could also be in the process of forming planets in a protoplanetary disc," officials wrote in the statement.

But in a cosmic (or better yet, comic) twist of irony, "a similar looking shadow phenomenon can be seen emanating from another young star, in the upper left of the image," officials said.

Perhaps there can only be one explanation for that "similar looking shadow" – it's a silent guardian, a watchful protector, a dark knight.