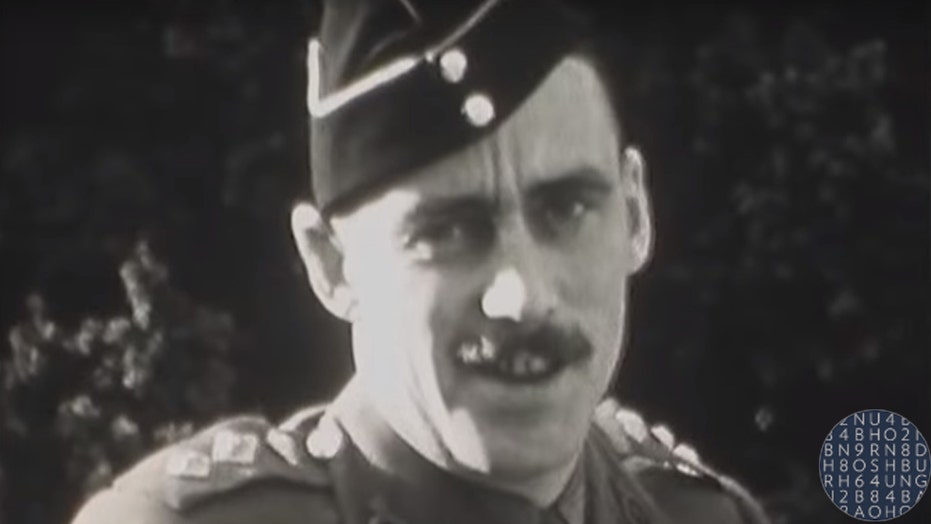 The footage is of Whaddon Hall in Buckinghamshire, a secret site connected to the famous Bletchley Park code-breaking base.

EXTREMELY RARE ENIGMA MACHINE USED BY THE NAZIS DURING WWII SURFACES, UP FOR AUCTION

"The incredibly rare 11-minute silent film, believed to be a compilation of footage recorded between 1939 – 1945, shows members of MI6 Section VIII at Whaddon Hall,” explains Bletchley Park in a statement. “During World War II, this was a most secret site where Ultra intelligence produced by the Government Code and Cypher School (GC&CS) at Bletchley Park would be sent, and then passed on to Allied commanders in the field.”

The hidden wartime footage was discovered in its original canister. (Bletchley Park)

The reel of footage was preserved in its original canister and donated to Bletchley Park by someone who wishes to remain anonymous.

“No other film footage of a site intimately connected with Bletchley Park exists,” said Dr. David Kenyon, research historian at Bletchley Park, in the statement, noting that it is not known who filmed it. "If it fell into the wrong hands, it would have given little away, but for us today, it is an astonishing discovery and important record of one of the most secret and valuable aspects of Bletchley Park’s work," he added.

The footage is of men and women at Whaddon Hall in Buckinghamshire, a secret site connected to the famous Bletchley Park code-breaking base. (Bletchley Park)

The silent footage shows men and women off duty at Whaddon Hall and Whaddon Chase, where they were billeted. A cricket match is also caught on camera.

Allied efforts to break the German Enigma Code, specifically the work of pioneering computer scientist Alan Turing, were depicted in the movie “The Imitation Game.” Turing and his fellow codebreakers at Bletchley Park developed a machine called the Bombe that helped decipher the encrypted German messages, which had been sent from the German military’s Enigma machines.

The silent film is a compilation of footage thought to be recorded between 1939 and 1945. (Bletchley Park)

“From mid-1940, German Air Force signals were being read at Bletchley and the intelligence gained from them was helping the war effort,” the Imperial War Museum explained on its website. The German Navy’s communications, however, were more complex and Turing worked to develop a technique he dubbed 'Banburismus' to crack the naval Enigma messages from 1941.

Three Poles who worked with Allied codebreakers to crack the German Enigma cipher codes were honored by the global Institute of Electrical and Electronics Engineers (IEEE) in 2014.