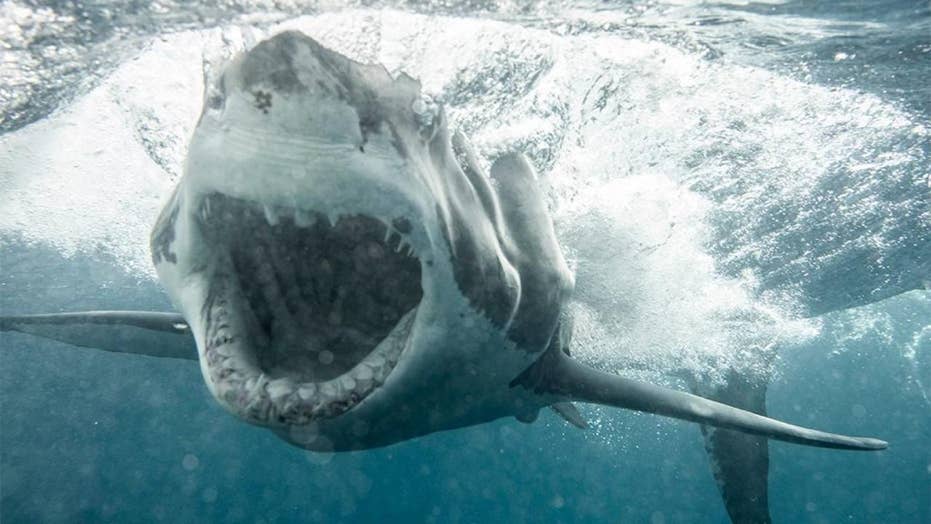 A 32-year-old photographer was able to capture incredible footage of a great white shark charging his underwater shark cage off Neptune Islands, in South Australia.

Kane Overall snapped the images of the 11-foot shark on March 3 and described the encounter as a wild experience.

“She was a female and around 3.5 meters [11.4 feet]. It came in around 2 meters [6.5 feet] from the cage and then one time charged us for this shot and ended up turning off around two feet from my camera," Overall said in comments obtained by Magnus News Agency.

The image was taken on March 3 from inside a shark cage by photographer Kane Overall. Kane was just a few feet from the 11-foot female shark. (Credit: KANE OVERALL -  MAGNUS NEWS)

He continued: “I knew it was going to be a pretty wild shot but maybe too close as I was shooting 50mn. When I got up on the boat everyone crowded around the camera in the housing for a quick look and we were all blown away.”

The Neptune Islands are home to a great number of sharks and have become popular with tourists over the years looking to spot them.

A photographer got this JAWS-some shot of a huge great white charging his shark cage underwater. Using a Canon 5d Mark IV with a 50 mm 1.4 lens, Kane Overall was able to get this incredible image of the apex predator. (Credit: KANE OVERALL -  MAGNUS NEWS)

Though shark attacks are rare, there have been a few isolated incidents in recent memory of sharks interacting with photographers.

In February, Andrew Fox captured terrifying images of a great white shark that came within inches of his hand as he attempted to get the best shots.

The remarkable images showed a 16-foot great white lifting its head out of the water, bearing its dagger-like teeth and biting a metal cage in the water, news.com.au reported at the time.

In March, pictures emerged of a large blue shark appearing to give a diver a "kiss" off the coast of Cape Town, South Africa.