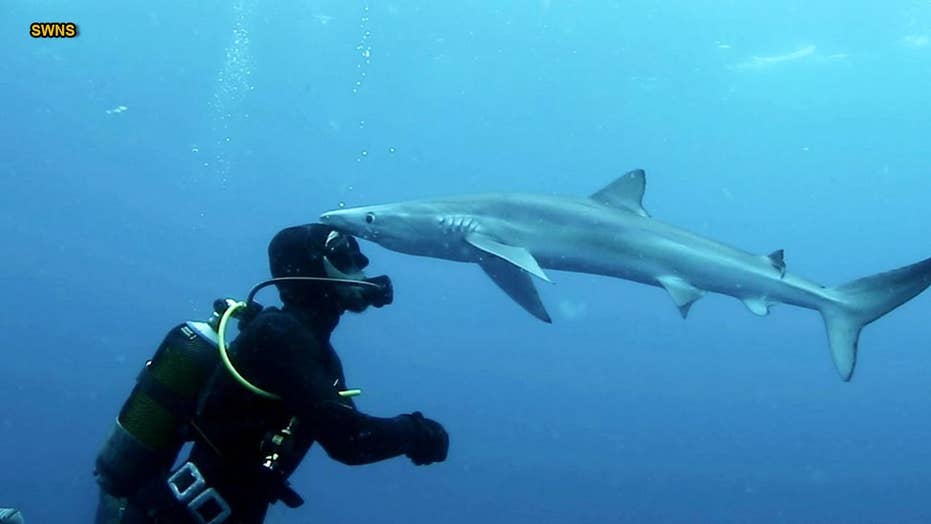 Photographer Steve Woods, captured the amazing moment a diver was kissed by a Blue Shark in waters off the coast off South Africa. Marine scientist Kevin Schmidt was leading the expedition in the waters off the coast of Cape Town, South Africa. The shark did not show any signs of aggression and Schmidt was not in any danger, as it was merely trying to figure out what he was, using the electro-receptors near its mouth.

A stunning video has surfaced showing a large blue shark appearing to give a diver a kiss.

Photographer Steve Woods captured the moment off the coast of Cape Town, South Africa, where marine scientist Kevin Schmidt was leading an expedition, SWNS reports. Schmidt, who is an environmental consultant in the area, said the moment he was able to stare into the shark's mouth, is something he will "treasure forever."

"On this particular trip, we were located 34 kilometers southwest of Cape Point where we hovered in six meters of water for over an hour with four blue sharks and three mako sharks," Schmidt said in comments obtained by SWNS. "Sharks, in general, are portrayed in such a negative light which does not reflect their true demeanor.

"Sensationalism portrays violence and power which overshadows the grace and beauty these creatures possess," Schmidt added.

"By ignoring "Hollywood instincts", you can feel their presence in the water and it truly evokes the opposite of fear," he continued. "Excitement, wonder, and curiosity- which is clearly mirrored by them in this picture. If you see a shark, consider yourself lucky and treasure the moment forever."

Woods posted the video to Instagram, where it has been viewed more than 23,000 times.

Schmidt said the shark did not show any signs of aggression and he was not in any danger, as it was merely trying to figure out what Schmidt was, using the electro-receptors near its mouth.

Blue sharks are described as "curious, open-ocean predators," according to Oceana.org, adding that they get their name from "the blue color of the skin, unique among the sharks."

Despite some blue sharks reaching 9 or 10 feet in length, they generally eat small prey, "including small pelagic fishes and small squids, and they undertake regular feeding dives to deeper pelagic waters, likely to hunt," the organization added.