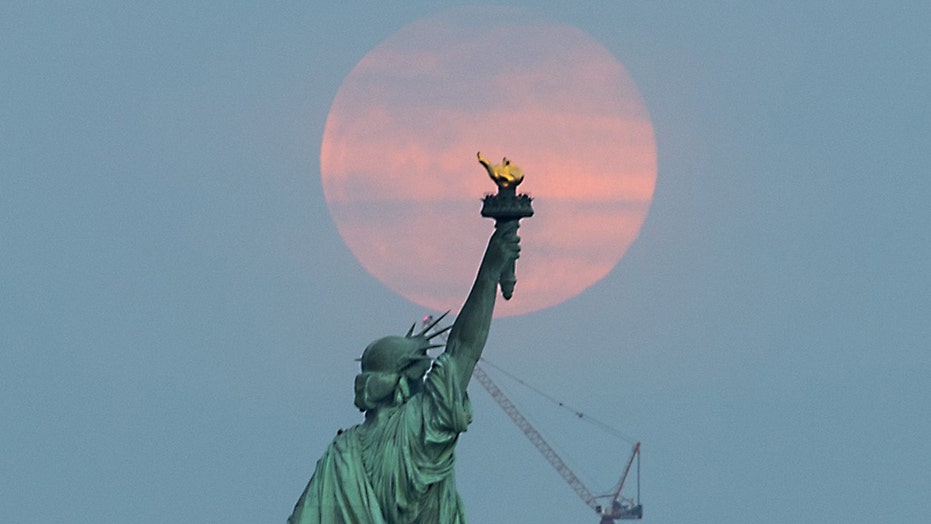 'Full worm supermoon' lights up the sky in stunning pictures

Skywatchers are in for a treat next week when the full worm supermoon rises in the sky.

“March’s full Moon, called the full Worm Moon, reaches peak fullness at 1:48 p.m. EDT on Monday, March 9,” explains the Old Farmer’s Almanac. “Look for the spectacularly bright Moon as it rises above the horizon that evening!”

The celestial event will be the first of three supermoons in 2020, according to the Old Farmer’s Almanac. EarthSky notes that the full worm moon will be the second-closest of the year’s supermoons.

Supermoons happen when the moon’s elliptical orbit brings it to the closest point to Earth while the moon is full. The phrase was coined in 1979, according to NASA.

The 'Super Worm Equinox Moon' rises behind the Statue of Liberty in New York, on March 20, 2019. (Photo by Atilgan Ozdil/Anadolu Agency/Getty Images)

“The Moon will appear full for about 3 days centered on this time, from early Sunday morning into early Wednesday morning,” adds NASA, on its website.

“The more northern tribes of the northeastern United States knew this as the Crow Moon, when the cawing of crows signaled the end of winter,” explains NASA, on its website. “Other northern names were the Crust Moon, because the snow cover becomes crusted from thawing by day and freezing by night, or the Sap (or Sugar) Moon as this is the time for tapping maple trees.”

Southern tribes, however, dubbed the celestial event the "worm moon," as a result of the casts left by earthworms on the thawing ground.