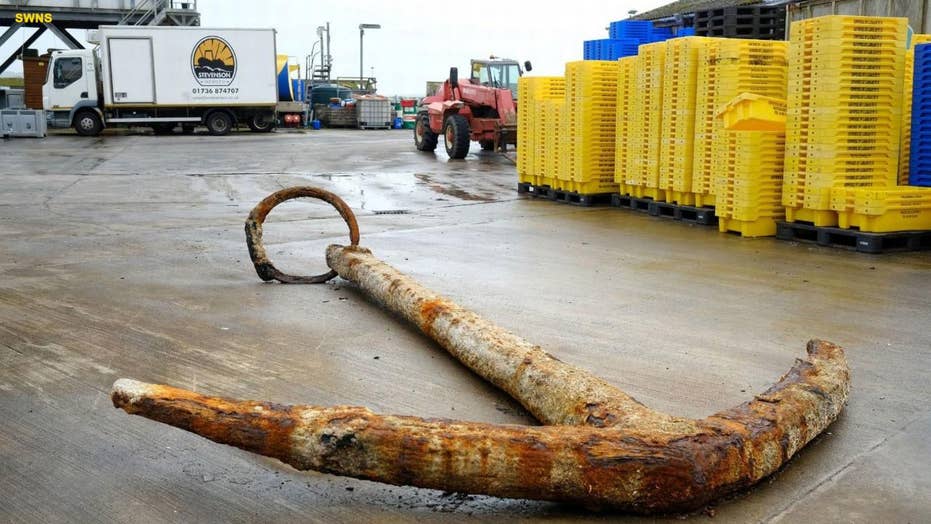 Anchor found off of U.K. coast could be from one of Britain’s richest ship wrecks

An anchor brought up in a trawler's fishing nets off the coast of the U.K. is reportedly from a 17th-century shipwreck. The anchor is believed to be from the Merchant Royal, which has been described as one of Britain’s richest wrecks, carrying cargo worth around $10.5 million.

An anchor from a treasure-laden 17th-century shipwreck has been found off the coast of the U.K.

SWNS reports that the anchor, believed to be from the Merchant Royal, was brought up in a fishing vessel’s net 20 miles off Land's End, Cornwall. The merchant ship sank in 1641 carrying an estimated $1.5 billion of treasure.

Dubbed “the El Dorado of the seas,” the Merchant Royal was carrying 100,000 pounds of gold and 400 bars of Mexican silver, as well as almost 500,000 pieces of eight (Spanish dollars) and other coins when she sank.

However, a local wreck expert warns that the ship went down in a treacherous location and amateur divers could be placing themselves in danger if they attempt to retrieve any of it.

The fishing crew who netted the anchor from what might be the world's most valuable shipwreck display their find. (SWNS)

Mark Milburn, co-founder of Cornwall Maritime Archaeology and owner of Atlantic Scuba, said the anchor matches the one from Merchant Royal. However, the location is too dangerous for those without specialist equipment to go hunting around the 300 feet deep site, he explained.

The site’s location within British waters means that finds will have to be reported to the Receiver of Wreck, an official body that administers law dealing with salvage rights in the U.K.

Other wrecks in U.K. waters have been revealing their secrets. Last year, for example, divers uncovered more fascinating artifacts from a treasure-laden ship that sank in the late 17th century.

Described as one of Britain’s richest wrecks, the merchant ship President was carrying a cargo of diamonds and pearls from India when she sank during a storm in February 1684.

The anchor is believed to be from the Merchant Royal, which sand off Cornwall in 1641. (SWNS)

The ship was said to be carrying cargo worth 8 million U.K. pounds in modern money, ($10.5 million).