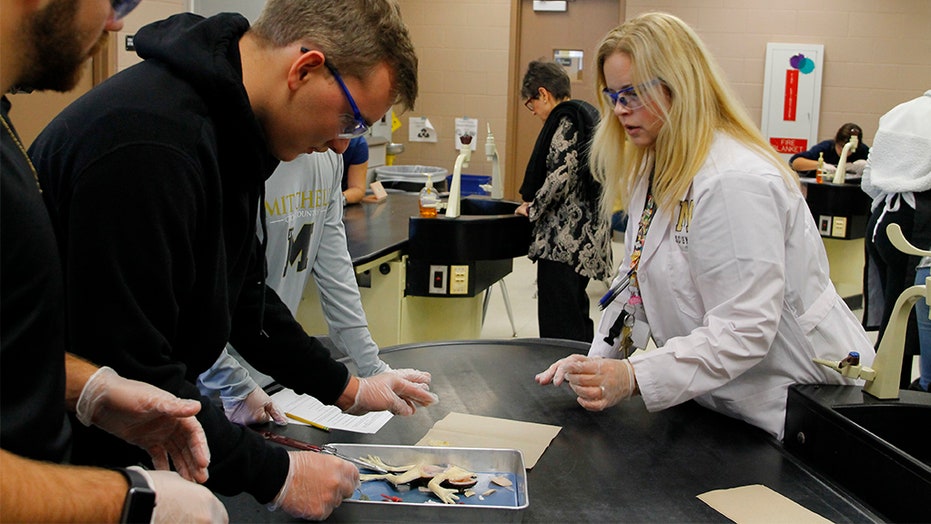 A Florida high school has found an alternative to the well-known, yet smelly and messy, science class ritual passed on throughout generations at U.S. high schools.

J.W. Mitchell High School in New Port Richey is the first school in the world to replace the guts and gore associated with cutting open slimy amphibians with man-made, synthetic frogs used for dissection labs that still have the mirrored organs inside.

Nearly 100 synthetic frogs were dissected by students on Nov. 20, according to a release by the company that created them. SynDaver is a developer of synthetic human and animal models used for education and medical purposes.

“So kids are involved, they are in it, they are finger deep in frog guts, but it’s all synthetic, so the smell isn’t there, the stigma isn’t there, they are not opting out," said J.W. Mitchell Principal Jessica Schultz, according to PETA. "Every kid is engaged and we have students from all academic levels in the classes that we chose and the teachers that we have them with and they are just all in on this.”

It's important for the students' learning experience that the synthetic frogs be as close to the real thing as possible. The company says they are designed to mimic the visual and textural properties of a live female frog and feature a synthetic skeleton, muscles, skin organs and reproductive system with eggs.

"All of SynDaver’s synthetic humans, animal models and task trainers simulate the anatomy of live patients in great detail, including individual muscles, tendons, veins, arteries, nerves and organ systems," said Shalin G. Gala, PETA’s vice president of International Laboratory Methods. "The company’s patented synthetic tissues are made of water, fibers and salts. Each of these non-toxic, non-latex tissues has been validated against the relevant living tissue for mechanical and physical properties."

The use of synthetic frogs in classrooms is also a bit safer, as well. Dead chemically-preserved frogs can be dangerous to students who handle them without protection due to harmful chemicals like formalin or formaldehyde, officials said.

"We’re excited to announce our revolutionary SynFrog, which is a far superior learning tool as it is designed to mimic living tissue. This makes it more like a live frog than the preserved specimens currently sold to schools for dissection labs,” said Dr. Christopher Sakezles, founder of SynDaver, according to the release. “SynFrog not only looks and feels like a real frog, it’s physically safer to dissect than a real preserved frog because it doesn’t contain potentially harmful chemicals like formalin."

The SynFrogs can also be reused after each use and they eliminate the ethical dilemma some people have over the killing of live amphibians to be placed in schools.

J.W. Mitchell High School in New Port Richey is the first school in the world to replace the guts and gore associated with cutting open the slimy amphibians with man-made, synthetic, frogs used for dissection labs that still have the necessary organs inside. (Judge Public Relations)

“We’re proud to have found a partner in SynDaver to bring this revolutionary new educational tool to life, replacing the outdated use of once-living frogs forever,” Gala said. “We look forward to schools around the world adopting this state-of-the-art technology that will not only save millions of frogs but is a far more effective and safer teaching tool.”

The frog dissection model costs $150, is 1-foot long and weighs roughly 2 pounds, according to the company website.