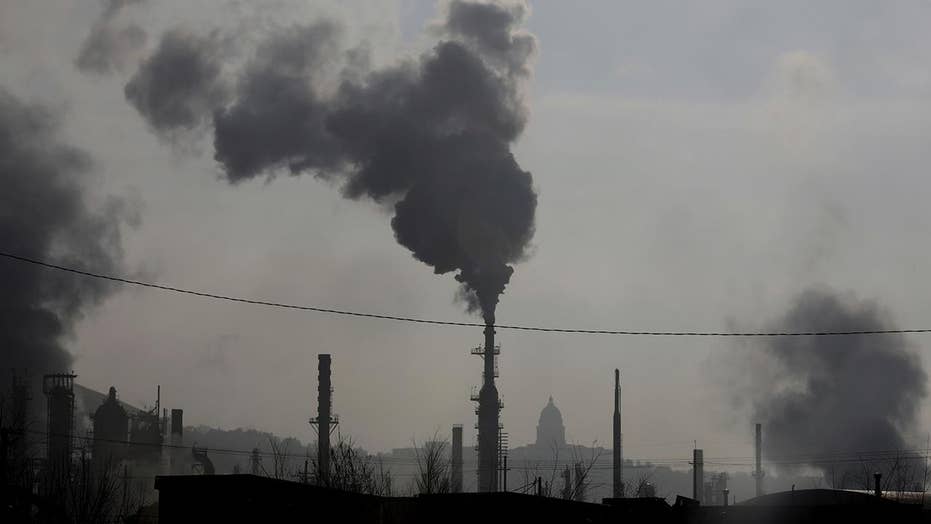 Scientist agree the world will get warmer but there's no cliff edge; Power the Future executive director Daniel Turner weighs in.

While there is a broad scientific consensus that man’s activity is playing a role in warming the planet, critics say the effects have been blown out of proportion by alarmists.

From dire predictions of mass extinctions to a rise in man-eating tigers, here are some of the most striking examples:

1) WARMING IS SO BAD, PEOPLE AVOID HAVING KIDS

Birth rates are at their lowest level in decades, and polls say that one big reason is fear of climate change.

In one Morning Consult survey done for The New York Times, 33 percent cited climate change as a factor in having fewer kids.

A recent Marketwatch article also found young people who don't save money for retirement because of climate change.

10 TIMES 'EXPERTS' PREDICTED THE WORLD WOULD END BY NOW

"I do not see how things could not be chaotic in 50 years,” a woman named Rodriguez told MarketWatch. “The weather systems are already off, and I don’t think it’s hyperbolic to be a little apocalyptic.”

Critics say such young people are victims of scaremongering by irresponsible media and politicians.

"Scaring our young people over climate change verges on criminal," Roy Spencer, a climate scientist at the University of Alabama in Huntsville, who maintains a database of satellite temperature data, told Fox News.

"The climate system is warming at such a slow rate that virtually no one would feel the change in their lifetime," Spencer said.

The Earth has warmed about 1 degree Fahrenheit since satellite data collecting began in 1979. U.N. average forecasts predict a further rise of between 2 to 5 degrees Fahrenheit over the next 80 years.

Earlier this year, Rep. Alexandria Ocasio-Cortez, D-N.Y., pitched her Green New Deal by saying: "Millennials and people, you know, Gen Z... we’re like: ‘The world is gonna end in 12 years if we don’t address climate change.'"

Ocasio-Cortez has since said that she wasn't being literal – the world will still exist – but she continues to argue that there are 12 years left before catastrophic consequences become unavoidable.

On Twitter, Ocasio-Cortez has set her top tweet to read: "Climate change is here + we’ve got a deadline: 12 years left to cut emissions in half."

The claim is based on a U.N. report that says such a cut within 12 years is the only way to limit the temperature increase since pre-industrial times to 2.7 degrees Fahrenheit (1.5 degrees Celsius). But the Earth has already warmed 1.8 degrees Fahrenheit since those times — so the U.N.'s 12-year statistic is about the cuts needed to avoid a further increase of more than roughly 1 degree Fahrenheit.

That's a far cry from "the world is gonna end," critics say.

"If we maintain our abundant energy and prosperity, then we'll still be doing great when it's that much warmer," Alex Epstein, author of the book "The Moral Case for Fossil Fuels," told Fox News.

Rep. Ocasio-Cortez highlighted a tornado warning in DC last week, saying on Instagram: "They are no longer being limited to the Great Plains, and are shifting to other regions of the country."

"The climate crisis is real y'all ... guess we're at casual tornadoes in growing regions of the country?" she said.

She left out that since the 1950s, strong tornadoes have become slightly less common, according to data from the National Oceanic and Atmospheric Administration.

"Strong to violent tornado activity has been going down for decades, so when one happens now it seems unusual," Spencer said.

An NPR article Ocasio-Cortez shared linked to an academic study that found that tornadoes have increased in an area centered around states like Aransas, Mississippi, and Tennessee. But those increases have been offset by declines in other areas, in particular in Texas.

The study reported that "it is currently unknown if this is due to rising global temperatures or natural variability."

The website "The Conversation," which advertises "Academic rigor, journalistic flair" reported last week that an Indian tiger which allegedly ate a human "tells us so much about the climate crisis."

The article claimed: "The reasons why big cats turn on humans are complex and can be specific to individuals. But they can no longer be explained outside the context of climate change."

It also failed to mention that Indian tiger populations increased sharply in recent years, rising from 1,411 tigers in 2008 to 2,226 in 2014, thanks to Indian conservation efforts.

News outlets around the world recently covered a U.N. report on biodiversity.

The New Yorker magazine ran the headline: "Climate Change and the New Age of Extinction."

Harvard Business Review reported that "through a combination of human-caused climate change and the near complete occupation of the planet by humans, we’re destroying habitats and species at an unreal rate (similar to previous extinction events from, you know, asteroids)..."

But critics say that such a "mass extinction" doesn't show up in the hard data — that the database cited by the U.N. actually shows a decline in species extinctions throughout the last century, as conservation efforts have increased.

"Extinctions peaked in the late 1800s and the early 20th century, followed by a significant decline that continues today," geologist Gregory Wrightstone wrote on his website, "Inconvenient Facts," on which he charted the raw extinction data.

While those data show humans are getting better at conserving species, many animals still remain endangered — including certain species of elephants, rhinos, tigers, apes, giant turtles, and others.

But the U.N. report itself finds that climate change plays a relatively small role in extinctions, putting it at less than one-fifth of the cause. Far greater is the impact of human encroachment on natural territory, according to the report.

Given what some scientists see as climate alarmism, they advise the public to be skeptical.

"People can make up virtually any claim they want, connecting something in nature to human-caused climate change, and millions of people will believe it," Spencer said.

He added: "Our young people need to be taught how to think, not be told what to think."