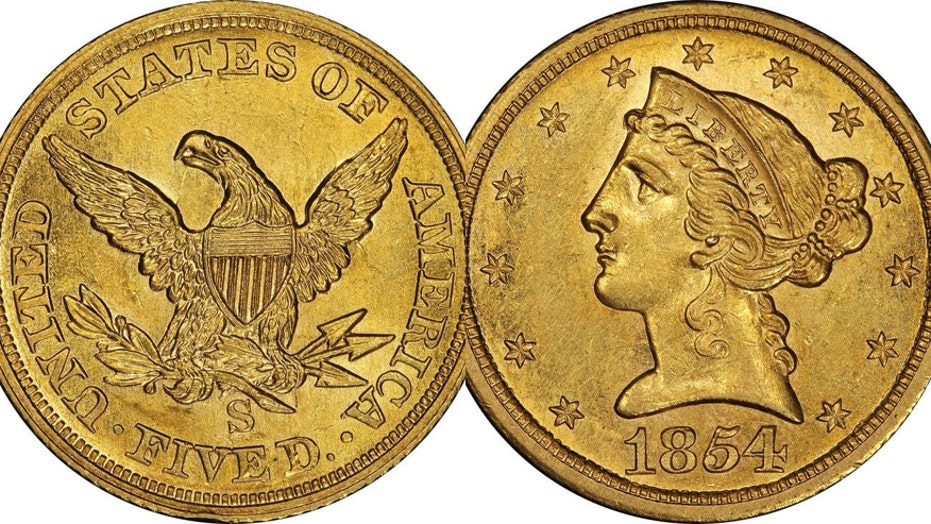 An extremely rare 1854 $5 gold coin could sell for millions of dollars when it is auctioned this month.

The 1854-S half eagle coin was struck in April 1854 one day after the opening of the San Francisco Mint, according to auction house Stack’s Bowers Galleries.

“To help deal with the overwhelming amount of gold discovered in California during the Gold Rush, the United States set up an official government Branch Mint in San Francisco in April 1854, the first such facility west of the Mississippi,” it said in a statement.

The coin, which is the first 1854-S half eagle minted, is one of just three examples known to exist.

The $5 coin will be auctioned on March 20 in Baltimore.

The coin is the first 1854-S half eagle minted. (Stack's Bowers Galleries)

Rare coins are big business. Last year, an extremely rare half-dollar coin from 1838 was sold at auction for $504,000.

An extremely rare 1894 dime--one of only 24 minted and once owned by former Lakers owner Jerry Buss--sold at auction for $1.32 million last year, including the buyer’s commission.